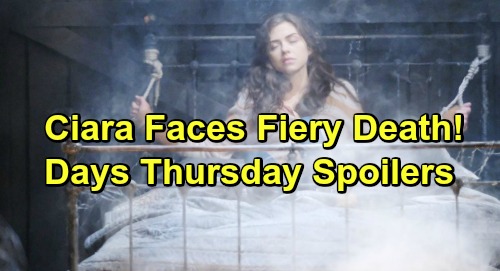 Days of Our Lives (DOOL) spoilers for Thursday, February 14, tease that Valentine’s Day will bring some sweet celebrations. John Black (Drake Hogestyn) will happily treat Dr. Marlena Evans (Deidre Hall) to a special evening, but a big secret will leave him on edge. It looks like John will hide his discomfort for the most part, but he’ll definitely be thinking about Diana Cooper’s (Judith Chapman) revelation.

After John confronted Diana, she admitted Leo Stark (Greg Rikaart) is John’s son. At least that’s what Diana claims! This is just a little too convenient if you ask us. It seems likely that Diana’s simply using this to draw John into her twisted web.

Diana needs something to cause issues for John and Marlena, so she probably thinks this is the ideal plan. Lying about Leo’s paternity is her best option right now. Of course, Diana’s strategy won’t work. John and Marlena’s love is the real deal, so there’s no way Diana’s deception can destroy their relationship.

Across town, Days spoilers say Gabi Hernandez (Camila Banus) will keep Leo busy. He was expecting Sonny Kiriakis (Freddie Smith) to come upstairs and perform his “husbandly duties,” but it was Gabi who burst through the door instead. Gabi’s riled up and ready to set Leo straight on a few things, so this lecture should keep him occupied for a while.

That’ll give Sonny and Will Horton (Chandler Massey) time to enjoy some Valentine’s Day magic. Days of Our Lives spoilers say they’ll savor their private reunion for as long as possible. Will and Sonny will make love as they hope for a brighter future. They’ll remember why they have to keep fighting against Leo and hopefully get rid of him for good.

At the police station, Hope Hernandez (Kristian Alfonso) will avoid Ben Weston’s (Robert Scott Wilson) gun and get out of there. Ben will still need some assistance, so he’ll track down Chad DiMera (Billy Flynn) and beg him to believe he’s innocent. Days of Our Lives spoilers hint that Chad have to trust Ben – at least enough to team up for a plot. They’ll take off to save their loved ones before it’s too late.

Jordan Ridgeway (Chrishell Hartley) has decided she can return Charlotte DiMera since she’s just a baby and can’t rat her out. Ciara Brady (Victoria Konefal), on the other hand, will be left to die in a fire. DOOL spoilers say Ben and Chad will race to the cabin as quick as they can, so they’ll have a chance to pull off a desperate rescue.

At the hospital, Rafe Hernandez (Galen Gering) will watch and wait by Kate Roberts’ (Lauren Koslow) bedside on Thursday. Her life will hang in the balance as the DOOL drama heats up! We’ll give you updates as other Days news comes in. Stay tuned to the NBC soap and don’t forget to check CDL often for the latest Days of Our Lives spoilers, updates and news.