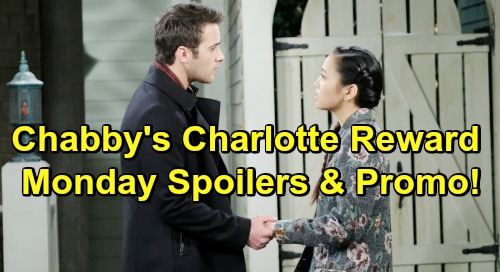 Days of Our Lives (DOOL) spoilers for Monday, February 11, tease that Eve Donovan (Kassie DePaiva) will push Jack Deveraux (Matthew Ashford) to make a selfish decision. He just let something slip about Haley Chen’s (Thia Megia) undocumented immigrant status, so she’ll think Jack should use this to his advantage. Eve’s constantly looking for ways to get ahead!

Once Eve pries a bit more info out of Jack, she’ll insist this is his ticket to becoming Salem’s next mayor. Of course, Days of Our Lives spoilers say Jack will have some reservations. He assured JJ Deveraux (Casey Moss) that he could be trusted. Jack will know how much spilling this info would hurt JJ and their relationship.

Even though Jack doesn’t remember his past, he still feels a deep connection with his son. To unleash this secret would be the ultimate blow, but Eve will downplay the damage it would cause. In fact, Eve will argue that it’ll work in JJ’s favor, too. She’ll suggest that Jack will be keeping JJ out of Haley’s drama, so it’ll be a win-win in her mind.

However, JJ will also pay his dad a visit on Monday. Days spoilers say he’ll thank Jack for his silence and encourage him to keep it up. Jack will be torn between his head and his heart, so DOOL fans can expect a tough situation. Whether Jack betrays JJ or not, Eve will undoubtedly take this shocker public herself if she has to.

Other Days of Our Lives spoilers say Jordan Ridgeway (Chrishell Hartley) will bark orders at her brother. She just showed up in Ben Weston’s (Robert Scott Wilson) hotel room, so she’s ready to take charge. Jordan will urge Ben to accept that he’s a danger to Salem and anywhere else he might try to go. She’ll insist Ben needs to be locked up and demand that he commit himself to Bayview again.

Over with Chad DiMera (Billy Flynn) and Abigail Deveraux (Kate Mansi), they’ll make a heartfelt plea for the return of their baby girl. Days of Our Lives spoilers say Chad will offer a giant reward to anyone who can bring Charlotte DiMera home safe and sound. They’ll be a mess over Charlotte’s disappearance, but they’ll cling to hope that she’s alive and will come back to them.

Charlotte will indeed be safely returned later this week, which is great news for “Chabby.” This ordeal will bring Chad and Abigail closer, so that’s the bright spot in all of this! We’ll give you updates as other Days details emerge. Stay tuned to DOOL and don’t forget to check CDL often for the latest Days of Our Lives spoilers, updates and news.