BY hellodrdavis on February 18, 2019 | Comments: one comment
Related : Days of Our Lives, Soap Opera, Spoiler, Television 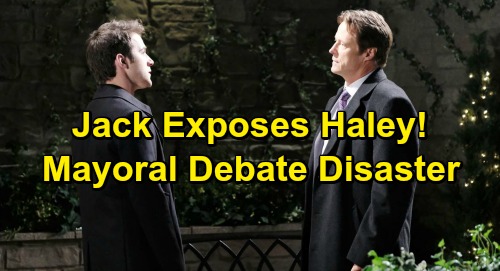 Days of Our Lives (DOOL) spoilers tease that Jack Deveraux (Matthew Ashford) will stoop to a new low. He’s currently embroiled in a contentious mayoral race with Abe Carver (James Reynolds) and former DA Melinda Trask (Laura Kai Chen). And he’s got Eve Donovan (Kassie DePaiva) guiding his campaign from the wings, so it’s been looking for a while that things could get ugly in the race.

Well, it looks like things will get ugly, and fast. Thanks to JJ Deveraux’s (Casey Moss) blabbing, Jack now knows that Melinda’s sister Haley Chen (Thia Megia) is an undocumented immigrant. Jack doesn’t yet know that Melinda and Haley are sisters, but that will change soon enough.

According to Days spoilers, Eve is going to overhear Melinda and Haley talking and she’ll get filled in that Haley’s in the country illegally. And once Eve knows about Melinda’s vulnerability point in the race, she’s going to pressure Jack to use it to his advantage.

Unfortunately, it looks like Jack’s going to wait until the mayoral debate to bring up Haley’s immigration status and use it as a weapon against Melinda. Of course, the ultimate goal here – all orchestrated by Eve – is to eliminate Melinda as a competitor so Jack can go toe to toe with Abe in the mayoral race.

Jack’s actions will have tremendous consequences for a lot of people. JJ will be stunned that his father used the information he shared with him in confidence, and this will surely drive a wedge between father and son. Their relationship was just blossoming, so this will be a huge setback.

And of course for Haley, the news will be devastating. She and her immigration status will now be front and center in the Salem news, which is somewhere she never wanted to be. She may be in danger of being investigated and deported. And her relationship with JJ will never be the same again, since she’ll feel like he betrayed her confidence.

And Jennifer Horton (Melissa Reeves) will be horrified by what Jack has done. Jennifer will be covering the debate live for the Salem Spectator, and she’ll be forced to report on the horrible thing that Jack has done.

But with Eve at his side, Jack will probably believe that he’s done the right thing and made a savvy political move. But will his professional ambitions make it impossible for him to ever reunite with his family again? It will be pretty hard for Jennifer and JJ to forgive him for throwing Haley under the bus all for political gain.

Do you think that Jack has any chance of reconnecting with his family after pulling this stunt? Stay tuned to DOOL and don’t forget to check CDL often for the latest Days of Our Lives spoilers, updates, and news.