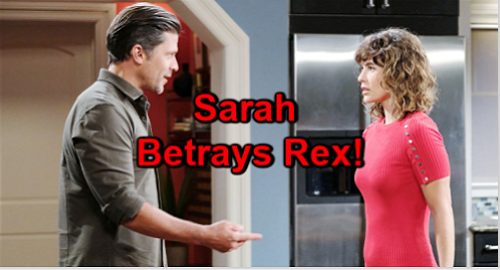 Days of Our Lives (DOOL) spoilers tease that Sarah Horton (Linsey Godfrey) and Eric Brady (Greg Vaughan) will grow even closer. They’re already far closer than they should be since Sarah recently reunited with Rex Brady (Kyle Lowder). However, the circumstances of that reunion weren’t ideal.

Sarah was beating herself up over sleeping with Xander Cook (Paul Telfer) and Eric was still fuming. It seemed like Sarah thought cheating Rex was all she deserved. Now that Eric has forgiven Sarah, their friendship is slowly becoming more again. They shared a flirty Valentine’s Day meal together thanks to Rex getting stuck at the hospital with Kate Roberts (Lauren Koslow).

Days of Our Lives spoilers say Sarah just won’t be able to get Eric off her mind. The harder she tries, the more Eric will flood her thoughts. DOOL fans can expect a sexy dream on February 27. Sarah will drift off to sleep and fantasize about some steamy moments with the man she really wants. Of course, we’re talking about Eric! It’s clear that Sarah would rather be with him than Rex the betraying liar.

Unfortunately, Sarah could become what she hates if she’s not careful. She was furious with Rex after he admitted his second cheating partner was her sister, Noelle Curtis. That would’ve led to revenge sex with Eric if he hadn’t stopped it.

Things could be different if the next time Sarah makes a move, it’s not about vengeance. Both Eric and Sarah could get swept up in a passionate moment. Will they be able to stop themselves and do the right thing?

Eric betrayed one brother when he slept with Nicole Walker (Arianne Zucker) while she was still committed to Brady Black (Eric Martsolf). Now he could betray another brother by hooking up with Sarah and devastating Rex. If Sarah doesn’t break up with Rex first, she’ll become a cheater, too.

Most Days viewers probably wouldn’t have much sympathy for Rex. After all, he knocked up Mimi Lockhart (Farah Fath), had sex with Sarah’s sister and lied for months. Rex was willing to marry Sarah with all this deception between them. It would serve him right to feel this kind of pain. Just call it getting a taste of his own medicine!

Nevertheless, Sarah and Eric will feel horrible if they take each other to bed – at least part of them will. Another part of them may think it feels so right. This could be the first step toward making them a solid couple. Days of Our Lives spoilers say Nicole’s return could blow that up later, but Eric and Sarah might as well enjoy themselves for now.

Do you think Sarah will make her move again? Will Eric be powerless to fight temptation? Will they betray Rex and leave him brokenhearted? We’ll give you updates as other Days news comes in. Stay tuned to DOOL and don’t forget to check CDL often for the latest Days of Our Lives spoilers, rumors, updates, and news.