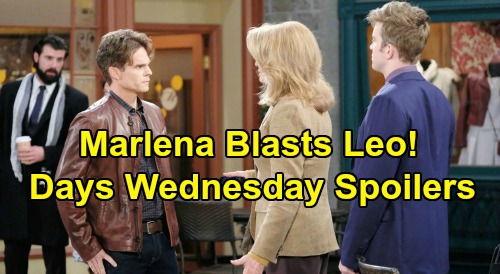 Days of Our Lives (DOOL) spoilers for Wednesday, February 20, tease that Jack Deveraux (Matthew Ashford) will have a chat with his son. JJ Deveraux (Casey Moss) recently confided in Jack, so he’ll want to be sure they’re still on the same page. Haley Chen’s (Thia Megia) secret is now in Jack’s hands, which means JJ can’t control it anymore. As a result, he’s second-guessing his decision to spill the beans.

DOOL fans know Jack isn’t quite the same man he used to be, so that’s undoubtedly contributing to JJ’s concerns. He could trust the old, familiar Jack. This one is a bit of a wildcard! Nevertheless, JJ will try to have faith in this memory-less version of his father. Jack promised JJ that he’d keep his mouth shut, so JJ will remind him of that vow and hope it sticks.

Unfortunately, Eve Donovan (Kassie DePaiva) could be the real problem here. She’s clearly running the show, so she’ll keep manipulating Jack as they prep for the upcoming mayoral debate. Days of Our Lives spoilers say Eve will score even more ammunition soon, so it won’t be long until this all blows up.

At the police station, Sonny Kiriakis (Freddie Smith) and Will Horton (Chandler) will be on the hot seat. Leo Stark (Greg Rikaart) was furious over Gabi Hernandez’s (Camila Banus) twisted bedside manner, so he’s in the process of seeking revenge. He just called Eli Grant (Lamon Archey) and Lani Price (Sal Stowers) to the Kiriakis mansion and announced that “WilSon” should be arrested.

Leo noted that he had evidence of attempted murder, which Days viewers know is true. Did Leo really throw away his cushy lifestyle by handing it over? All his Kiriakis perks vanish if he takes Will and Sonny down, so the photos everyone expects may not be in that envelope.

Then again, Will and Sonny may genuinely have to wiggle out of this. Regardless, they’ll sweating it out during Wednesday’s intense interrogation.

Dr. Marlena Evans (Deidre Hall) won’t be pleased when she hears about Leo’s latest move. She’s fed up with Will and Sonny’s suffering, so she’ll definitely let Leo have it! Days of Our Lives spoilers say Marlena will enjoy giving Leo a stern lecture, but she won’t succeed in scaring him off.

It sounds like some fantastic scenes are looming on the NBC soap. We’ll give you updates as other Days news emerges. Stay tuned to DOOL and don’t forget to check CDL often for the latest Days of Our Lives spoilers, updates and news.