Days of Our Lives Spoilers: Tripp Busts Fire-Starting Claire, Accuses Her of Leaving Ciara to Burn 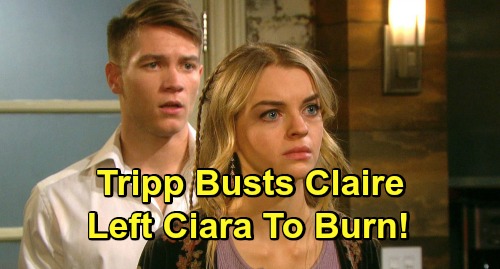 Days of Our Lives (DOOL) spoilers tease that Claire Brady (Olivia Rose Keegan) will find herself in a world of trouble. DOOL fans know there’s a new pic out that features Claire in the smoky cabin. She looks deep in thought – as if she’s trying to decide whether to rescue Ciara Brady (Victoria Konefal) or leave her there to die.

On February 22, the identity of the fire-starter will be revealed, but Days spoilers suggest viewers will only be clued in at first. Jordan Ridgeway (Chrishell Hartley) will undoubtedly deny it, which will make Rafe Hernandez (Galen Gering) and Hope Hernandez (Kristian Alfonso) wonder who could’ve done such a thing. They’ll have no idea who would target Ciara.

That’s when DOOL may cut to a fake flashback of Claire at the cabin. Since Claire apparently wrestled with whether to save Ciara, there’s a chance someone else set the fire and she simply stumbled across it. There’s also a chance Claire somehow started the fire accidentally. 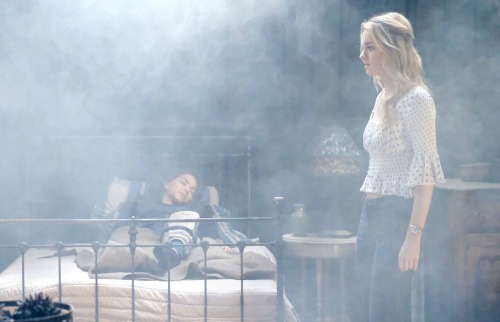 Regardless, it looks like Claire was indeed there and left Ciara to burn. Naturally, many Days of Our Lives fans are outraged over this twist. Claire is a jealous, scheming teenage stereotype. She’s not a murderous psychopath!

There are certain things we can buy for the sake of the storyline, but this isn’t one of them. Having Claire try kill her own aunt over a passing obsession like Tripp Dalton (Lucas Adams) is going too far.

This is kind of like when John Black (Drake Hogestyn) was willing to poison his best bud, Steve Johnson (Stephen Nichols). It just wasn’t believable. The real John would’ve brought Steve in the loop and worked together on a scheme. Nevertheless, Days of Our Lives is seemingly taking Claire down an unbelievable route as well.

Claire was sympathetic over Ciara’s rape and intimacy issues right before she ended up in the fire. Who shows sympathy for a loved one and then is willing to murder her? This whole situation screams rewrite, so DOOL appears to be throwing the twist in for the sake of a shocker.

On March 1, Days of Our Lives spoilers say Tripp will make a stunning discovery. He’ll search for something in Claire’s jewelry box and find another item he never expected. Will it be something that connects Claire to the cabin fire? Claire might try to make up some bogus story, but Tripp will keep pushing and hurling accusations. It’s just a matter of time until the truth comes out.