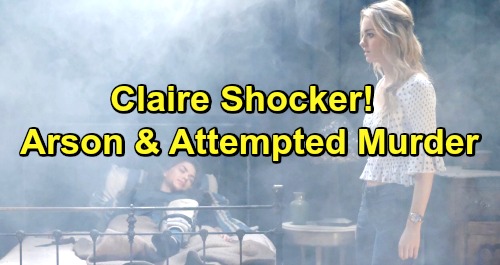 Days of Our Lives (DOOL) spoilers tease that a huge bombshell is coming. For months now, Hope Hernandez (Kristian Alfonso) has accused Ben Weston (Robert Scott Wilson) of starting the cabin fire last year that nearly killed her daughter Ciara Brady (Victoria Konefal) after Ciara’s motorcycle accident. Ciara was trapped in the burning cabin, unable to move due to her leg injury and was rescued at the last minute.

But Ben has argued from the beginning that he didn’t set the file. He even had Marlena Evans (Deidre Hall) hypnotize him to make sure that he didn’t do it. But still, Hope has persisted in her belief that Ben is the most likely person to have started the blaze.

After all, who else would have been at the remote cabin and had the opportunity and motive to start the fire?

Now that Jordan Ridgeway (Chrishell Hartley) is back and started yet another fire at the cabin while Ciara was inside, some have speculated that it could have been Jordan who started the first fire as well. She could have been plotting to frame Ben and put him away to “save” others from him way back then.

But Days spoilers indicate that Jordan’s not the person who set the first fire and that the real culprit is none other than Claire Brady (Olivia Rose Keegan)!

It seems that Claire was present at the cabin during Ciara’s first bout of captivity there and that she started the blaze. But why would Claire do this? Did she really want to kill her best frenemy?

Of course, it’s always possible that Claire went looking for Ciara and somehow found her at the cabin, then decided to do away with her, perhaps to get Tripp Dalton (Lucas Adams) all for herself or to get revenge on Ciara. After all, at that time, Ciara had just busted Claire for rigging the “Face of Bella” contest.

But that scenario seems pretty sinister, even for scheming Claire. Perhaps Claire figured out that Ben was caring for Ciara at the cabin, and she deliberately set the fire so that Ben could rescue Ciara and become even more important to her…thus keeping her away from Tripp.

It will be interesting to see just what Claire’s motive was for setting the fire. She’s going to find herself in deep legal trouble for arson and attempted murder. Hope will be in an interesting position, too, as Ciara’s mom and Claire’s grandmother. She won’t want to see Claire suffer, but justice will have to be done.

Of course, we should note that Olivia Rose Keegan will soon be leaving Days, so this storyline could be the beginning of her exit story. Perhaps she’ll ultimately be found guilty of her crimes and she’ll be carted off to jail for a while. Or she could even end up at Bayview if it’s determined that she snapped due to a mental disorder of some sort.

Why do you think Claire set the first cabin fire? Stay tuned to DOOL and don’t forget to check CDL often for the latest Days of Our Lives spoilers, updates, and news.