Days of Our Lives Spoilers: Chloe or Gabi – Who’s The Better Match For Stefan? 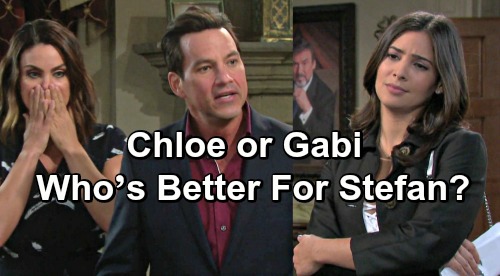 Days of Our Lives (DOOL) spoilers tease that Stefan DiMera (Tyler Christopher) is finally moving on after his obsession with Abigail DiMera’s (Kate Mansi) alter “Gabby.”  He’s ready to give love another chance, and it seems he’s found someone who is willing to at least consider a romance with him…and that’s Chloe Lane (Nadia Bjorlin).

Ever since Stefan saved Chloe from El Fideo’s (Andoni Gracia) armed men, Chloe has really taken a liking to Stefan. She even agreed to move into the DiMera mansion and has developed a certain level of trust in him. And Stefan has developed a romantic interest in Chloe, so much so that Days spoilers say that the two will soon share a kiss.

But that kiss will be interrupted by Stefan’s nemesis, Gabi Hernandez (Camila Banus). Gabi has been a thorn in Stefan’s side for some time, and lately the two have been at each other’s throats over GabiChic. Most recently, Gabi went to the DiMera board behind Stefan’s back and got her company reinstated at DiMera, which really upset Stefan.

But there’s always an element of sexual tension between Gabi and Stefan. They seem to enjoy being angry with each other, and it shows. If they’d just quit trying to stab each other in the back all the time, they might realize that they have a great deal of passion between them.

Well, it seems that there may be some fireworks coming up between Gabi and Stefan. After Gabi interrupts Chloe and Stefan’s kiss, Stefan will angrily accuse Gabi of being jealous and sparks will fly. So, one has to ask: Who does Stefan really want here? Chloe or Gabi? And who’s the better match for him?

On the one hand, Chloe could be good for Stefan as she’s a calm, even-keel person who is relatively drama-free on a day-to-day basis. Sure, she’s got the El Fideo threat and possibly a stalker after her, but from an interpersonal standpoint she’s pretty normal. She might help Stefan to be a kinder, gentler person.

And then there’s Gabi, who has a big temper and a dramatic personality. She would (and currently does) bring out Stefan’s feisty side and make him even edgier than he already is. The two of them could be a real power couple with a lot of passion between them.

Of course, it’s probably all going to come down to what Stefan wants – a calmer relationship or a dramatic, feisty one. Which woman do you think is better suited for Stefan? Stay tuned to DOOL and don’t forget to check CDL often for the latest Days of Our Lives spoilers, updates, and news.