Days of Our Lives Spoilers: Diana Tries To Kill Marlena – But Makes It Look Like Kristen DiMera’s The Culprit 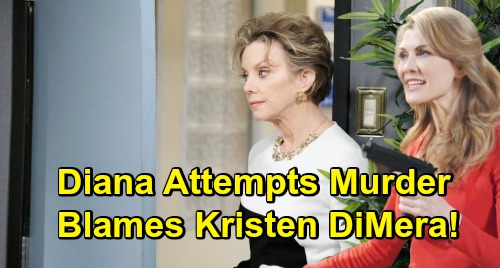 Days of Our Lives (DOOL) spoilers tease that Diana Cooper (Judith Chapman) has a dastardly plan in store for Marlena Evans (Deidre Hall). Ever since she returned to Salem, it’s been clear that she’s obsessed with her former love John Black (Drake Hogestyn) and she’s not at all a fan of Marlena.

In fact, it seems that Diana will do just about anything to drive a wedge between John and Marlena. She struck up a deal with Victor Kiriakis (John Aniston) and got Victor to tell Marlena that Leo Starke (Greg Rikaart) was John’s son before John got a chance to do it. It was all designed to make it easier for Diana to get John back.

But it seems that Diana will realize she’s got to take more drastic action if she really wants John all for herself. John and Marlena have a very strong bond, and they can overcome practically any obstacle in their way. Diana will apparently determine that she needs a more sinister – and permanent – solution.

Exactly what she plans for Marlena remains to be seen, but Days spoilers indicate that Marlena will soon be the victim of some sort of attack, and that it will be serious enough for her to be hospitalized as a result. We’ll see whether Diana perpetrates the attack herself or has someone help her do it…but either way, Diana will be the driving force.

Fortunately, Marlena will narrowly survive the attempt on her life, and Diana’s plan with be thwarted. And when John goes snooping around to try to find out who was after Marlena, Diana will be ready with a plan. According to Days spoilers, John will be thrown for a loop when someone claims that Kristen DiMera (Stacy Haiduk) was the one who tried to kill Marlena.

But apparently this will be a well-thought-out diversion orchestrated by Diana to keep John from suspecting her of the crime. Of course, everyone assumed that Kristen died in the Memphis warehouse fire, so John will probably be quite distracted by the possibility that Kristen could actually be alive. And this might give Diana the opportunity to finish the job she started and do away with Marlena for good!

Do you think that John will figure out that it was actually Diana who tried to kill Marlena? Stay tuned to DOOL and don’t forget to check CDL often for the latest Days of Our Lives spoilers, updates, and news.