Days of Our Lives Spoilers: Gabi’s Fury Erupts After Stefan Fires Her – Teams Up With Brady For Hostile Takedown 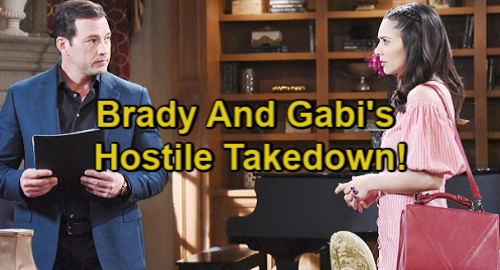 Days of Our Lives (DOOL) spoilers tease that Stefan DiMera (Tyler Christopher) will have to face the facts. As Abigail Deveraux (Kate Mansi) prepares to remarry Chad DiMera (Billy Flynn) and leave town, Stefan will realize his worst fear has come true. “Gabby” isn’t coming back, so Stefan will have to find a way to move on.

Even though Abigail kept up the ruse as part of her plan, Gabi Hernandez (Camila Banus) was ultimately to blame. Her plan was what gave Stefan false hope.

That’s why Stefan will direct most of his anger at Gabi during the week of February 18-22. Days of Our Lives spoilers say Stefan will once again blast Gabi for bringing so much pain to his life.

Stefan’s still struggling with the loss of Charlotte DiMera as well. He loved that little girl and truly thought she was his daughter, so it’s another strike against Gabi. He certainly won’t be quick to forgive.

Gabi recently made it clear that she wouldn’t stand for Stefan’s business antics, but he’ll really push her to the limit this week. Days of Our Lives spoilers say Stefan will infuriate Gabi by firing her.

He’ll add to Gabi’s woes by announcing that he’s going to sell off Gabi Chic. Stefan will want to cause Gabi just a small sliver of the pain he faced. He won’t think it’s enough, but it’ll be a nice start.

However, Gabi isn’t the kind of gal who will just go sulk in a corner. Like Stefan pointed out, revenge tends to be a vicious cycle. Gabi’s mission for vengeance led to Stefan’s and now it’s about to swing around to Gabi’s fight again. It turns out she’ll get some help from a surprising source this time around.

Days spoilers say they’ll determine that they’re on the same page about bringing Stefan down.

A plot will form to do just that, but it won’t be easy. Stefan hates Gabi’s guts, so distracting him from Chloe will come with some challenges. Nevertheless, Gabi may hope she can use Stefan’s love for “Gabby” against him. Since Abigail’s alter was a version of Gabi, perhaps Stefan could fall for the real thing, too.

There’s a fine line between love and hate anyway, so Stefan and Gabi’s chemistry is already evident. It looks like Gabi may try to seduce Stefan in hopes of breaking his heart later. Since Gabi was spotted on set with a wedding ring a while back, her plan may work even better than she anticipated!

Will Gabi genuinely fall for Stefan thanks to her scheme? Regardless, Brady will just hope Gabi can keep Stefan busy and as far away from Chloe as possible. We’ll give you updates as other Days news comes in. Stay tuned to DOOL and don’t forget to check CDL often for the latest Days of Our Lives spoilers, updates and news.