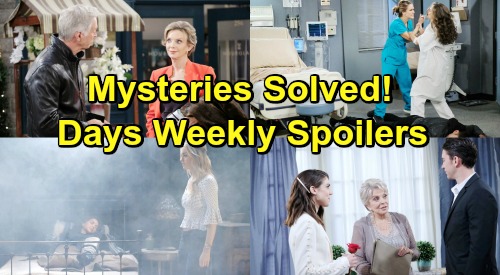 Days of Our Lives (DOOL) spoilers for the week of February 18-22 tease that the drama will heat up in Salem. For starters, Rafe Hernandez (Galen Gering) will notice Ted Laurent (Gilles Marini) has some issues with boundaries. He’ll sense that Ted took the opportunity to grow closer to Hope Hernandez (Kristian Alfonso) while he was away.

However, Rafe will want to put an end to that closeness. He’ll confront Ted and insist that Hope is off limits. Rafe will urge Ted to back off and respect his marriage, but it’s doubtful Ted will play by Rafe’s rules. Meanwhile, Chad DiMera (Billy Flynn) and Abigail Deveraux (Kate Mansi) will plan to remarry. They’ll put together a rushed ceremony and leave town together for a joint “Chabby” exit.

Over with Sarah Horton (Linsey Godfrey), she’ll struggle with cheating suspicions. Sarah just can’t trust Rex Brady (Kyle Lowder), so she’ll need someone she can talk to about it. Naturally, that someone will be Eric Brady (Greg Vaughan). He’ll have dinner with Sarah and help her work through the problems she shares.

Other Days of Our Lives spoilers say John Black (Drake Hogestyn) will get ready to confess. Diana Cooper (Judith Chapman) claims Leo Starke (Greg Rikaart) is John’s son, but she doesn’t want him to divulge that to anyone. John will feel like he has to tell Dr. Marlena Evans (Deidre Hall) the truth, but Diana will warn that it’ll only lead to trouble. She’ll push John to keep quiet about this shocker.

There’s a good chance that Diana is lying about Leo’s paternity, so it’s easy to see why she’d want to contain her bogus claims. For now, Leo will continue to cause mayhem for Will Horton (Chandler Massey) and Sonny Kiriakis (Freddie Smith). His accusations will land him at the police station for questioning, so Eli Grant (Lamon Archey) will have his work cut out for him.

DOOL fans will also see Gabi Hernandez’s (Camila Banus) war with Stefan DiMera (Tyler Christopher) heat up. She’ll get fired and face the threat of losing Gabi Chic entirely, but she won’t stand by and take that. Days of Our Lives spoilers say Gabi will fight back in a big way, so Stefan had better watch out.

After a life-threatening battle with Ciara Brady (Victoria Konefal) and Ben Weston (Robert Scott Wilson), Jordan will be hauled down to the police station. Rafe will push her to open up about the trauma she faced and later, she’ll be carted off to Bayview. Unfortunately, Jordan’s warning will leave Ben with doubts about the future. He’ll worry he can’t be the man Ciara needs him to be.

Days spoilers say the person who set the cabin fire will also be revealed, but will it be Jordan or someone else. Looks like Claire Brady (Olivia Rose Keegan) in newly released Days of Our lives pics – or is she looking at someone else?!?  We’ll give you updates as other news comes in. Stay tuned to DOOL and don’t forget to check CDL often for the latest Days of Our Lives spoilers, updates and news.