Days of Our Lives Spoilers: Obsessed Claire Loses Tripp and Her Sanity – Breakup Too Much, Violent Final Spiral Begins

BY Heather Hughes on May 8, 2019 | Comments: 2 comments
Related : Days of Our Lives, Soap Opera, Spoiler, Television 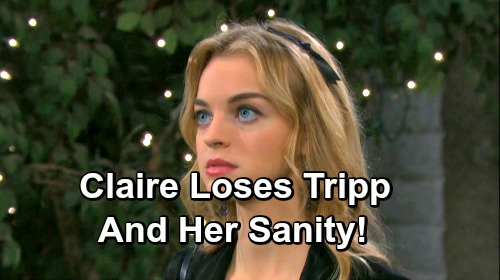 Days of Our Lives (DOOL) spoilers tease that Claire Brady’s (Olivia Rose Keegan) plan will backfire. All she’s ever wanted to do was have an uncomplicated relationship with Tripp Dalton (Lucas Adams). Claire doesn’t want to share Tripp or deal with outside interference. She simply wants to live her life and have a normal boyfriend – one who isn’t already married to someone else!

However, that’s not the situation Claire has found herself in. She can either let Tripp be married to Haley Chen (Thia Megia) for years or she can take drastic action to tear them apart. Days of Our Lives spoilers say Claire will pick the latter, but it won’t turn out to be the best option. It looks like her big mistake will lead to a brutal breakup.

DOOL fans can expect Claire to make another shocking recording. She’ll once again get a taped marriage sham confession. After Claire hands it over to Eve Donovan (Kassie DePaiva), things will quickly head downhill. It won’t be long until Haley’s life has completely blown up. From there, it won’t take Tripp long to follow the clues and realize Claire was a huge part of the problem.

Days spoilers say Tripp will figure out who Claire teamed up with. He’ll determine that Claire and Eve have been working together all along. Naturally, Tripp will explode over the info he’s uncovered. He’ll be appalled with Claire for pretending to help Haley and secretly plotting against her.

Tripp will likely insist Claire isn’t the person he thought she was. He doesn’t know the half of it! Claire tried to kill her own aunt, so a recording is far from her worst stunt. Days of Our Lives spoilers state that Ciara Brady (Victoria Konefal) will end up consoling Claire later, which should bring some guilt. Claire almost murdered Ciara in that cabin fire, but she’ll take comfort in her arms anyway.

Of course, we have to wonder where Claire will go from here. It can’t be anywhere good since she’s been obsessed with Tripp for so long. He was the reason for that attempt on Ciara’s life, so Claire just doesn’t think straight when it comes to Tripp. This could be the start of Claire’s true violent final downward spiral.

What crazy scheme will Claire cook up next? Will she seek revenge on Haley at some point? Could she kidnap Tripp and try to make him love her? These are reasonable options based on how Claire’s behaved lately, so don’t miss the hot drama ahead.

It sounds like some exciting scenes are in store. We’ll give you updates as other Days news comes in. Stay tuned to DOOL and don’t forget to check CDL often for the latest Days of Our Lives spoilers, updates and news.