Days of Our Lives Spoilers: Volatile Claire Lashes Out At Tripp – It Won’t Be Pretty as Violence Looms

BY hellodrdavis on May 1, 2019 | Comments: Leave Comments
Related : Days of Our Lives, Soap Opera, Spoiler, Television 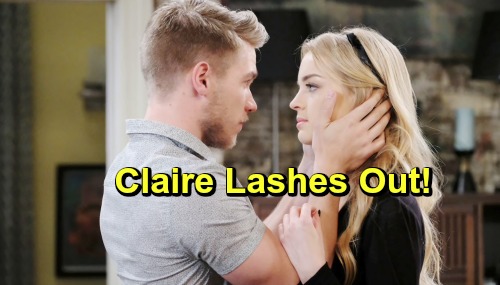 Days of Our Lives (DOOL) spoilers tease that Claire Brady (Olivia Rose Keegan) will be at her wit’s end. She’s been under a tremendous amount of stress lately. First off, she had to watch her boyfriend Tripp Dalton (Lucas Adams) marry Haley Chen (Thia Megia). Claire wasn’t fully on board with the marriage, but she tried to make the best of it for Tripp’s sake.

Of course, DOOL fans know that Claire did her best to get Haley deported. She worked in cahoots with Eve Donovan (Kassie DePaiva) to “out” Haley as an undocumented immigrant, but her efforts blew up in her face when Tripp decided to marry Haley. Now she’s got to live with the situation, and it’s really killing her.

According to Days of Our Lives spoilers, things will get even worse for Claire. With the ICE agent watching Tripp and Haley closely, it will be suggested that Claire move out of the loft. It won’t look right for Tripp’s ex-girlfriend to be living in the loft with him and Haley, so Claire will get the boot. That will cause Claire added stress.

Then, Claire will learn that Haley and Tripp may have to stay married for years in order for Haley to remain in the country legally. This will be more than Claire can take, and she’ll freak out. All she wants is her boyfriend to herself, and she won’t think that’s asking too much.

And all of this will be happening while Claire is seriously worried about being discovered as the arsonist who set the first cabin fire that nearly took Ciara Brady’s (Victoria Konefal) life. Claire’s got JJ Deveraux (Casey Moss) breathing down her neck about the lighter that he found amongst her things, and he even took the lighter to the Salem PD for testing.

Days of Our Lives spoilers say that Claire will soon team up with Eve in order to frame Ben Weston (Robert Scott Wilson) for setting the cabin fire, but that won’t go exactly as planned. Ciara and Ben will decide to team up and investigate the fire, determined to find out who set it. And Ciara will be just as determined to prove that Ben didn’t set the fire as Claire is to prove that he did set it.

All of this means that Claire is going to be under a tremendous amount of stress and pressure. In the coming days, look for Claire to snap big time. Days of Our Lives spoilers say that Tripp will find a wedding photo of himself and Haley torn in half, and that will only be the beginning. She’ll also seriously lash out at Tripp, and it won’t be pretty.

Of course, Claire isn’t the most emotionally stable person to begin with, so we could really see a new brand of crazy coming from her in the coming days. Do you think that Claire will break under all the pressure? Stay tuned to DOOL and don’t forget to check CDL often for the latest Days of Our Lives spoilers, updates, and news.