BY Heather Hughes on May 16, 2019 | Comments: one comment
Related : Days of Our Lives, Soap Opera, Spoiler, Television 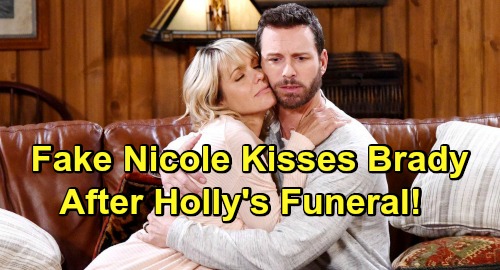 Days of Our Lives (DOOL) spoilers tease that Eric Brady (Greg Vaughan) will get some good news. He’ll learn that thanks to Brady Black (Eric Martsolf), Nicole Walker (Arianne Zucker) is finally free from Xander Cook’s (Paul Telfer) grip. Brady made a deal with Xander, which will pan out and relieve this burden for Nicole. Eric will naturally be grateful when he hears how Brady stepped up.

Since Nicole is currently drawn to Brady, Eric will think maybe his brother can help him out. Days of Our Lives spoilers say they’ll start to bond again, so Eric will ask Brady for a favor. He’ll wonder if Brady can talk Nicole into giving him another chance.

Eric hasn’t made any progress, but he’ll feel like Nicole will listen if it’s coming from Brady. He’ll pour his heart out and urge Brady to understand how much they need each other right now. Days of Our Lives spoilers say Brady will get that Eric’s hurting, but he’ll suggest holding off. He’ll think Nicole needs to work through this stage of grief before she’ll be open to hearing Eric out.

Brady will contend that waiting until after the funeral would be for the best. However, he’ll at least push Nicole to let Eric attend. Nicole will reluctantly agree, so everyone will gather for a somber memorial service. It’ll be a rough time for all Holly Jonas’ (Harlow and Scarlett Mallory) loved ones, but they’ll just try to press on.

Days of Our Lives spoilers state that Nicole will surprise Brady after the funeral. She’ll be an emotional mess, so Brady will comfort her as much as he can. That’ll lead to a kiss that catches Brady off guard, but you can bet he’ll enjoy it. Brady may feel a familiar spark, but he’ll definitely worry about causing drama with Eric. He’ll know this could reignite their feud in a big way.

Of course, DOOL fans know Holly isn’t really dead. It also looks like that isn’t really Nicole. Days spoilers say Nicole is running a scam with Xander, which suggests Kristen DiMera (Stacy Haiduk) may be posing as Holly’s grieving mom. That shocker will cause chaos in Salem eventually, but Brady will fear a different kind of chaos for now. Reuniting with Nicole could push jealous Eric to his limit!

It sounds like some exciting developments are ahead on the NBC soap. We’ll give you updates as other Days details emerge. Stay tuned to DOOL and don’t forget to check CDL often for the latest Days of Our Lives spoilers, updates, and news.