BY Heather Hughes on May 15, 2019 | Comments: 2 comments
Related : Days of Our Lives, Soap Opera, Spoiler, Television 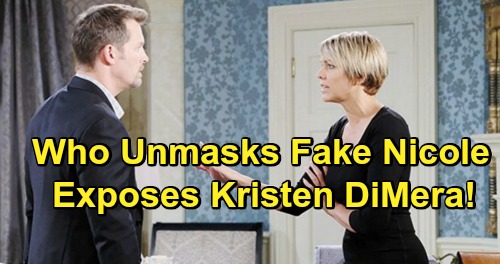 Days of Our Lives (DOOL) spoilers tease that Nicole Walker (Arianne Zucker) will pat herself on the back and offer gratitude as well. She’ll thank Xander Cook (Paul Telfer) for helping her pull off their plot, so something’s obviously up. Nicole loathes Xander, so a team effort between them doesn’t add up.

That’s especially true since Nicole will be praising Xander. Days of Our Lives spoilers say she apparently wasn’t forced into this situation. Nicole is willingly in cahoots with the man who’s made her life miserable, so there has to be a reason why.

Since the real Nicole wouldn’t fake her own daughter’s death, she seems to be a DOOL imposter. The clues strongly suggest Kristen DiMera (Stacy Haiduk) may be impersonating Nicole – perhaps through an eerily realistic mask. That’s likely why “Nicole” hates almost everyone except Brady Black (Eric Martsolf), the man Kristen’s obsessed with.

If Nicole’s going to be mad at anyone, it should be Brady. She’d be living as a happy family with Eric Brady (Greg Vaughan) and Holly Jonas (Harlow and Scarlett Mallory) if Brady hadn’t blackmailed her. Since we’ve established that Nicole is probably a phony, who’s going to figure that out? Days spoilers state that someone will have to uncover the truth first.

Brady is a great option since he’ll keep growing closer to “Nicole.” He’ll be thrilled over the chance to make things right, but he won’t know the whole story. Could “Nicole’s” strange behavior ultimately tip him off? Kristen could easily slip up and say something that only she would know. Brady understands how Kristen operates, so he could grow suspicious as time goes on.

However, it’s also possible Brady will ignore the red flags. He may brush off any strange occurrences and focus on helping “Nicole” through her grief. Brady may be too close to see the truth. Since Eric will have the benefit of distance, he may see things clearly. Eric might be the one to blow the lid off Kristen’s scheme, which would be satisfying since Nicole is his true love.

Then again, Kristen isn’t known for playing be the rules or being the perfect partner. She’s always looking out for number one, so what happens if she betrays Xander? He could turn around and betray her, too. Days of Our Lives spoilers say Xander and Kristen will definitely have to watch their backs.

Brady, Eric and Xander seem like the top three exposure contenders, but there could be someone surprising who makes the discovery. Regardless, some shocking revelations are ahead! We’ll give you updates as other Days news comes in. Stay tuned to DOOL and don’t forget to check CDL often for the latest Days of Our Lives spoilers, updates and news.