Days of Our Lives Spoilers: Week of May 20-24 – Disturbing Discoveries, Huge Secrets and Unleashed Fury

BY Heather Hughes on May 17, 2019 | Comments: one comment
Related : Days of Our Lives, Soap Opera, Spoiler, Television 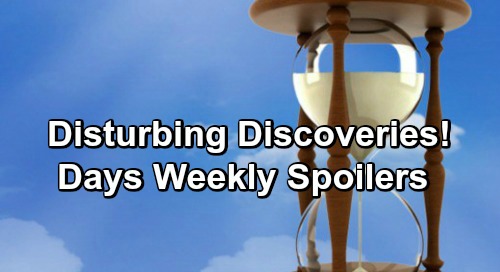 Days of Our Lives (DOOL) spoilers for the week of May 20-24 tease that some shocking situations are on the way. First, Will Horton (Chandler Massey) will have a tough setback. He’s battling a brain tumor that was brought on by Dr. Wilhelm Rolf’s (William Utay) memory serum. Traditional treatment methods aren’t likely to work, so Will’s health woes will get worse before they get better.

Will’s setback could involve another seizure or it could be a memory-related mishap. He couldn’t remember what he talked about with Sonny Kiriakis (Freddie Smith) not too long ago. Will might face a similar ordeal this week. He could also experience some erratic mood swings, so Sonny will have to help Will cope as best as he can.

John Black (Drake Hogestyn) will hope he can help Will by tracking down Dr. Rolf’s diary. Little does he know it’s in Xander Cook’s (Paul Telfer) possession. It’s right there in Salem if John can just find some clues and locate it.

Over with JJ Deveraux (Casey Moss), he’ll take Haley Chen (Thia Megia) to the Horton cabin. Days of Our Lives spoilers say they’ll plan to hide out there while they figure out their next move. Meanwhile, Claire Brady (Olivia Rose Keegan) will decide Eve Donovan (Kassie DePaiva) is to blame for her romantic woes. She’ll explode at Eve for costing her Tripp Dalton (Lucas Adams) and her chance at happiness.

However, Claire will be furious with Tripp as well. She’ll gather up some of his clothes and prepare to torch them, but Ben Weston (Robert Scott Wilson) will catch her in the act. Naturally, Ben will become convinced that there’s more to Claire’s story. He’ll see the potential for a crazy fire-starter just under the surface, so he’ll set out to prove it.

At the Salem PD, Eve will be appointed police commissioner. She’s not really qualified, but Jack Deveraux (Matthew Ashford) will think Eve’s a good option anyway. He’ll offer the position to Rafe Hernandez (Galen Gering) first, but the detective will decline to take it. Rafe won’t feel right about it since Hope Hernandez (Kristian Alfonso) was just fired, and he doesn’t like Jack’s attitude anyway.

Other Days spoilers state that Nicole Walker (Arianne Zucker) will have something to celebrate. She’ll be impressed with Xander for helping out with her plot, so something’s amiss in this team effort. Nicole would never willingly work with Xander, so Kristen DiMera (Stacy Haiduk) could be masquerading as Nicole for this scheme.

DOOL fans can also expect Maggie Kiriakis (Suzanner Rogers) to fall off the wagon. Brady Black (Eric Martsolf) will be stunned when he spots Maggie passed out drunk. Elsewhere, Dr. Sarah Horton (Linsey Godfrey) and Eric Brady (Greg Vaughan) will face Nicole’s fierce wrath. Nicole’s already getting the picture on the feelings between them, so she may use that as she unleashes her fury.

Days of Our Lives spoilers say Nicole will kiss Brady after Holly Jonas’ (Harlow and Scarlett Mallory) tearful memorial service, so that move won’t go over well with Eric! Finally, Chloe Lane (Nadia Bjorlin) will make a startling discovery. She’ll find Stefan DiMera (Brandon Barash) in bed with Gabi Hernandez (Camila Banus), so there’ll be no denying what’s going on between them.

It sounds like some excellent drama’s coming up in the week ahead. We’ll give you updates as other Days news emerges. Stay tuned to DOOL and don’t forget to check CDL often for the latest Days of Our Lives spoilers, updates and news.