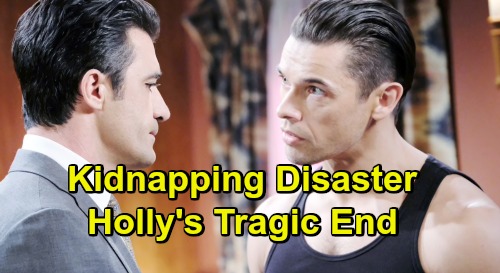 Days of Our Lives (DOOL) spoilers tease that Nicole Walker (Arianne Zucker) will soon be getting some terrible news. She’s just burst back onto the Salem scene, with no real explanation for where she’s been or what she’s been doing for the past several months. And while DOOL spoilers say that Eric Brady (Greg Vaughan) and Nicole will have a tender reunion, their happiness won’t last long.

Sarah Horton (Linsey Godfrey) will have the terrible task of breaking up Eric and Nicole’s reunion with the news of Holly Jonas’ (Harlow and Scarlett Mallory) kidnapping. The little girl was taken from the DiMera mansion while Stefan DiMera (Brandon Barash) and Chloe Lane (Nadia Bjorlin) were having dinner.

Of course, no one knows at this point that Ted Laurent (Gilles Marini) and Xander Cook (Paul Telfer) will be in cahoots and behind the kidnapping. Exactly what they do with Holly remains to be seen, or what their end goal is, but they’ll have to have some plan in place to keep the little girl somewhere.

Unfortunately, it looks like Holly’s kidnapping won’t be the end of the heartache for Nicole. She’ll understandably be worried sick when she learns that her daughter has been taken, and the police will quickly get involved. Hope Hernandez (Kristian Alfonso) and Rafe Hernandez (Galen Gering) will soon be on the case, but things will soon go terribly wrong.

Exactly what transpires remains to be seen, but DOOL spoilers indicate that whoever is holding Holly captive will try to make a quick escape, and a terrible accident will occur. We’re likely looking at a car accident involving the vehicle carrying Holly.

Days of Our Lives spoilers also indicate that Rafe will be involved in causing or somehow contributing to the accident, so it looks like some poor police work will be involved. And this will occur after Rafe disobeys a direct order from Hope, so the Salem PD will probably be on the hook for the accident.

Of course, exactly what happens to Holly is unknown at this point. It’s a terrible thought, but she could be killed in the accident or seriously injured. Either way, it’s going to be a terrible tragedy for Nicole, who was hoping for a sweet reunion with her happy, healthy daughter. But it seems that things won’t go that way.

What do you think will happen to little Holly? Stay tuned to DOOL and don’t forget to check CDL often for the latest Days of Our Lives spoilers, updates, and news.