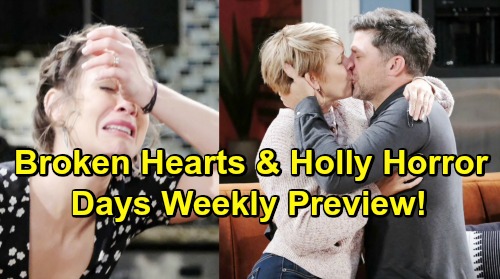 Days of Our Lives (DOOL) spoilers preview for the week of April 29-May 3 tease that we’ll see happiness turn to panic and heartbreak. First, Eric Brady’s (Greg Vaughan) reunion with Nicole Walker (Arianne Zucker) will be derailed by Holly Jonas’ (Harlow and Scarlett Mallory) kidnapping. Chloe Lane (Nadia Bjorlin) will be a mess over the kid’s disappearance, but DOOL fans will see the culprit soon enough.

Xander Cook (Paul Telfer) is behind the actual snatch, but Ted Laurent (Gilles Marini) is pulling the strings. They’ll meet up to discuss their plan in the week ahead, so Days fans will hear more about what they’re up to. Over with Hope Hernandez (Kristian Alfonso), she’ll make an unsettling discovery. It’ll involve Ciara Brady (Victoria Konefal) and Ben Weston’s (Robert Scott Wilson) steamy sex life!

After Hope finds them both in less clothing than she would like, she’ll serve up some disapproving looks. Hope will undoubtedly give Ciara a lecture later, so she may have to remind her mother that she’s an adult and can make her own choices. Next, Jack Deveraux (Matthew Ashford) will pull off a crazy stunt to make poll gains. Abe Carver (James Reynolds) is certainly in for an unpleasant surprise.

Jack recently picked up on the strange vibe between Abe and Sheila Watkins (Tionne “T-Boz” Watkins). There are definitely some complicated feelings between them, which will lead to a kiss this week. Jack will turn it into quite a scandal at the upcoming debate, which will leave Valerie Grant (Vanessa Williams) reeling during her surprise visit.

JJ Deveraux (Casey Moss) will hope to get Jack back when he publicly declares something damaging. He could call attention to Jack raping Dr. Kayla Johnson (Mary Beth Evans), but that would seem cruel to her. Instead, JJ may mention the fling he once had with Eve Donovan (Kassie DePaiva). He could suggest that Jack and Eve’s supporters shouldn’t buy this grand love story they’re trying to sell.

Other Days of Our Lives spoilers say Eli Grant (Lamon Archery) and Lani Price (Sal Stowers) will get into an argument. They’ll spar over David and all the time Lani’s spending with him. Eli may be feeling neglected, so he could remind Lani that she doesn’t have custody of this kid. Since Lani will even request a leave of absence from work, this will turn into a huge deal for this couple.

Elsewhere, Hope and Rafe Hernandez (Galen Gering) will have to team up. They aren’t in a great place right now, but Days of Our Lives spoilers state that police work will force them together. They’ll be on the hunt for missing Holly, but they won’t have a clue that Ted could be tied to the drama.

Back with Nicole, she’ll have another round of emotional reunions. Maggie Kiriakis (Suzanne Rogers) will be overjoyed to see Nicole and so will Brady Black (Eric Martsolf). As word of Nicole’s survival spreads, Dr. Sarah Horton (Linsey Godfrey) will be miserable. She’ll have to watch her chance to be with Eric slip away, but at least Dr. Marlena Evans (Deidre Hall) will console her.

It sounds like another fantastic week’s coming up in Salem. We’ll give you updates as other Days news emerges. Stay tuned to DOOL and don’t forget to check CDL often for the latest Days of Our Lives spoilers, updates and news.