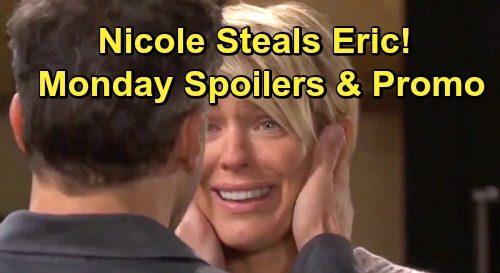 Days of Our Lives (DOOL) spoilers for Monday, April 29, tease that Eric Brady (Greg Vaughan) will remain in shock over Nicole Walker’s (Arianne Zucker) sudden reappearance. He was fully convinced Nicole was dead, so seeing her right there in his apartment is overwhelming to say the least. Eric will have plenty of questions for Nicole, but he’ll mostly just feel joy in these powerful moments.

Dr. Sarah Horton’s (Linsey Godfrey) heart will sink as she realizes Eric will inevitably reunite with Nicole instead of being with her. In fact, she’ll step aside to make sure of it. Sarah was the one Eric turned to as he was grieving this loss. She’s listened to Eric share how much he loves Nicole and always will.

Days spoilers say Sarah will excuse herself to let them talk, but she won’t expect to find a single Eric when she gets back. Sarah and Dr. Rex Brady (Kyle Lowder) will eventually head over to tell Maggie Kiriakis (Suzanne Rogers) that Nicole’s alive and well.

In the meantime, Nicole will tell Eric about everything it took to get back to him – and Holly Jonas (Harlow and Scarlett Mallory).

Unfortunately, Holly was just scooped up from her bed by a kidnapper. Monday’s DOOL episode will reveal that Xander Cook (Paul Telfer) is responsible. He’s formed a partnership with Ted Laurent (Gilles Marini), so Days of Our Lives spoilers say we’ll learn more about their twisted motives.

As for Chloe Lane (Nadia Bjorlin), she’ll be having a total meltdown. Chloe will freak over Holly’s abduction, but Stefan DiMera (Brandon Barash) will do his best to soothe her. He’ll get his men out looking for Holly immediately and the police will also be notified. Days of Our Lives spoilers state that they’ll need all hands on deck for this urgent search.

Over with Sheila Watkins (Tionne “T-Boz” Watkins), she’ll make a confession about possibly feeling more than friendship for Abe Carver (James Reynolds). He’ll admit he might be feeling the same way, so they’ll kiss to see if there’s a spark.

There won’t be, so they’ll stick to being pals. Too bad a lurking Jack Deveraux (Matthew Ashford) will snap a pic to use against his rival!

Finally, Rafe Hernandez (Galen Gering) and Lani Price (Sal Stowers) will bond over David. Their relationships have turned into disasters, so they’ll connect over that as well. Will Lani and Rafe truly fall for each other soon? We’ll give you updates as other Days news comes in. Stay tuned to DOOL and don’t forget to check CDL often for the latest Days of Our Lives spoilers, updates and news.