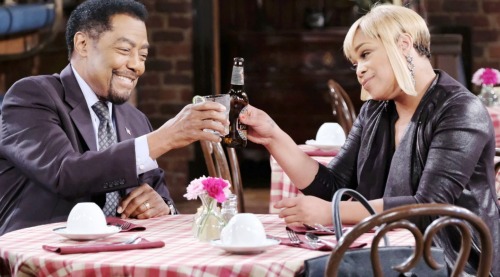 Days of Our Lives (DOOL) spoilers has some casting news to pass on. Tionne (T-Boz) Watkins, who portrays Sheila Watkins on the NBC soap, has left the show. Sheila’s last day on canvas will be on Thursday, May 2, when she quits her position as Abe Carver’s (James Reynolds) assistant and leaves Salem.

Tionne’s departure will mark the end of her second stint as Sheila. Eli Grant’s (Lamon Archey) childhood friend first appeared in Salem in November 2016 and exited in January 2017, then returned again in September 2018.

Since then, Sheila has primarily served to irritate Abe and complicate his life. She mistakenly handed over incriminating evidence to Xander Cook (Paul Telfer), after he sweet-talked her into it. This led to Xander getting off scot-free for the crime of shooting and nearly killing Marlena Evans.

But despite Sheila’s mistake with Xander, Abe stood by her and let her keep her job. And since then, the two have gotten closer. In fact, since Abe’s girlfriend Valerie Grant (Vanessa Williams) left town, Sheila and Abe have really bonded. They’ve even grown attracted to each other, even though neither of them would ever admit it.

The specific circumstances surrounding Sheila’s departure aren’t clear at this point, but she’ll abruptly leave Salem. It may have something to do with the stunt that Jack Deveraux (Matthew Ashford) has in store for the next mayoral debate, as Sheila will leave right after the debate.

Perhaps Jack will try to “out” the growing feelings that Sheila and Abe are developing for each other. Jack plays dirty, and it would be just like him to try to malign Abe by suggesting that he and his assistant are involved in an affair when Abe is supposed to be in a relationship with Valerie. Jack might insinuate that Abe is lacking in judgment by getting involved with his assistant.

Of course, Abe and Sheila aren’t “involved,” but voters don’t know that, and Jack could get them riled up about Abe having an inappropriate relationship. Such an accusation might be what causes Sheila to quit her job and leave; she might think that she’s helping Abe’s chances of winning by leaving the scene.

As for Tionne, she’s headed to the WEtv series “Growing Up Hip Hop” Atlanta,” so it will probably be a while before Sheila returns to DOOL, if she returns at all. Are you going to miss Sheila? Stay tuned to DOOL and don’t forget to check CDL often for the latest Days of Our Lives spoilers, updates, and news.