Days of Our Lives Spoilers Next 2 Weeks: Chloe Finds Proof of Dangerous Spy – Will and Sonny’s Ammo Search – Ted Has a Secret 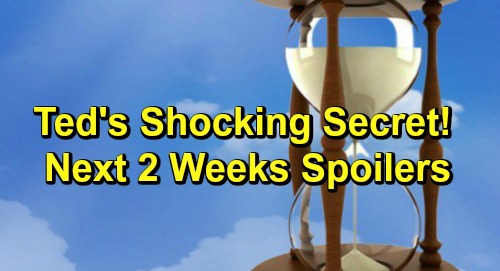 Days of Our Lives (DOOL) spoilers for the next two weeks tease that some bold moves are on the way. During the week of February 25-March 1, Jack Deveraux (Matthew Ashford) will take Eve Donovan’s (Kassie DePaiva) advice and derail the mayoral debate. Melinda Trask (Laura Kai Chen) will be left reeling when Jack pipes up about her sister being an undocumented immigrant.

Despite Melinda’s denial, this will completely blow up her campaign and give Jack the upper hand. Of course, it won’t win him any points with JJ Deveraux (Casey Moss)! In fact, this will destroy the relationship they were trying to rebuild. JJ will view this as a major betrayal, but Haley Chen (Thia Megia) will feel like JJ did the same thing to her. She’ll worry about getting deported soon.

Meanwhile, Claire Brady (Olivia Rose Keegan) may imagine what it’d be like to come clean. In DOOL’s weekly promo, Ciara Brady (Victoria Konefal) pushes Claire to admit she knows who set the fire. Claire finally blurts out that it was her, but it’s doubtful Days will expose that huge secret so quickly. We’d say Claire’s mind will simply play out the horrible scenario.

Thanks to the backlash in this fantasy, Claire may tell herself that confessing would end in disaster. Unfortunately, Tripp Dalton (Lucas Adams) will find something alarming in Claire’s jewelry box later. Could it be the lighter from the cabin? If not, it could have something to do with Haley. She’ll be hiding out at the loft before long, so Claire’s jealousy should erupt.

Other Days of Our Lives spoilers say Rex Brady (Kyle Lowder) will propose to Sarah Horton (Linsey Godfrey) again. Once the week of March 4-8 rolls around, Rex will still be waiting for an answer. That’s obviously not a good sign! Sarah won’t be able to get Eric Brady (Greg Vaughan) out of her head, but Rex may not notice their growing connection just yet.

Over with Sonny Kiriakis (Freddie Smith) and Will Horton (Chandler Massey), they’ll be out on bail and desperate for ammo. Will and Sonny will decide to rummage around Diana Cooper’s (Judith Chapman) room in hopes of scoring what they need. Anything that could help them bring Leo Starke (Greg Rikaart) down would be a good thing.

Days spoilers state that John Black (Drake Hogestyn) will do some digging of his own. He’ll manage to crack open Diana’s safe and have a gander at what’s inside. However, Diana is quite a schemer as well. She’ll do some brainstorming and come up with a strategy to push Dr. Marlena Evans (Deidre Hall) out of the picture.

Diana will think she still has a shot with John if she can just get rid of Marlena. Since Marlena and John’s love is so strong, Diana will have her work cut out for her. Next, let’s talk about Ted Laurent (Gilles Marini). Days of Our Lives spoilers say a secret from his history will come to light.

Hope Hernandez (Kristian Alfonso) will be upset by what she learns, but Ted may justify keeping his mouth shut. They’ll bicker, but some feelings will be buried under the surface. Finally, Chloe Lane (Nadia Bjorlin) will feel like someone’s spying on her. Some evidence will back up Chloe’s fears and leave her even more concerned about the threat.

Days viewers can expect some hot drama over the next two weeks. We’ll give you updates as other news comes in. Stay tuned to DOOL and don’t forget to check CDL often for the latest Days of Our Lives spoilers, updates and news.