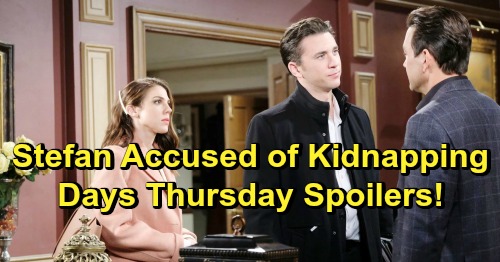 Days of Our Lives (DOOL) spoilers for Thursday, February 7, tease that Abigail Deveraux (Kate Mansi) will make a shocking discovery. She just wrapped up her chat with Jordan Ridgeway (Chrishell Hartley), who offered to show herself out. Of course, Jordan headed upstairs instead. That’s because she wanted to kidnap Charlotte DiMera to keep her safe from Ben Weston (Robert Scott Wilson).

By the time Abigail leaves the kitchen and checks on her daughter, Jordan will be long gone with the baby. Panic will erupt as Abigail calls the cops as well as Chad DiMera (Billy Flynn). Since Abigail considers Jordan a perfectly sane and concerned friend, it’ll never even cross her mind that Jordan could be the kidnapper. She’ll consider more sinister options instead.

Ben will naturally be on the list since Abby and Jordan were just talking about him. Jordan insisted that Ben could still go after Charlotte, so Abigail may wonder if her gal pal was right. However, another DOOL character will ultimately become the top suspect. Both Chad and Abigail will believe Stefan DiMera (Tyler Christopher) could be to blame.

Days spoilers say Chad will march over to the DiMera property and demand some answers. He’ll accuse Stefan of swiping Charlotte and putting her who knows where. Chad will hope he can pry Charlotte’s location out of Stefan, but his brother will have no clue what he’s talking about. There’s no guarantee Chad will buy that, he’ll at least have to consider other possibilities.

Other Days of Our Lives spoilers say Chloe Lane (Nadia Bjorlin) will mull over two offers. Both Stefan and Brady Black (Eric Marstolf) will urge her to move in the family mansions, so she’ll have to decide which one will be safest for her family. Stefan did a good job of protecting Chloe during that showdown, so she owes him her gratitude along with her life. She’ll eventually decide Stefan’s place is the way to go.

Over with Sarah Horton (Linsey Godfrey), Days spoilers say she’ll try to make peace with Eric Brady (Greg Vaughan). Unfortunately, that could be difficult thanks to the clothes and shoes Eric found on the floor. He knows Sarah and Rex Brady (Kyle Lowder) have been getting busy in the bedroom, so he’ll battle jealousy and heartbreak on Thursday.