BY hellodrdavis on February 11, 2019 | Comments: one comment
Related : Days of Our Lives, Soap Opera, Spoiler, Television 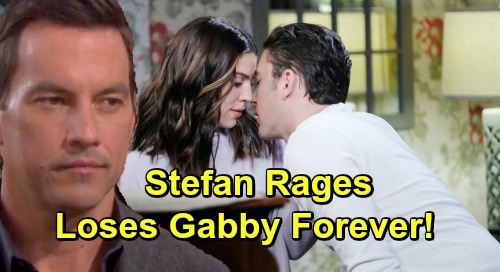 Days of Our Lives (DOOL) spoilers tease that Stefan DiMera (Tyler Christopher) will get some very bad news. He’s been silently suffering ever since Abigail Deveraux (Kate Mansi) divorced him and divulged that she was just pretending to be her alter “Gabby” to get what she wanted from him. Stefan was truly in love with Gabby and he was devastated to learn that her most recent recurrence wasn’t real.

And that’s why Stefan’s going to be upset when he learns that Chad DiMera (Billy Flynn) and Abigail have reunited. After Charlotte DiMera’s kidnapping is resolved and they’ve got Charlotte back in their arms, Abigail and Chad will find their way back to each other almost immediately. They’ll realize what’s important in life, and Abigail will forget all about her grudge against Chad.

After a quick but meaningful wedding, “Chabby” will be ready to embark on a new adventure far away from Salem. They’ll want to get away from the kidnapping memories, Stefan, the DiMera power struggle, and just the whole Salem scene. It will be a great move for them as a couple and as a family with Thomas DiMera (Asher Morissette) and baby Charlotte.

But for Stefan, the whole situation will be a nightmare. He’ll know that the more stability that Abigail has in her life, the less the likelihood that he’ll ever see Gabby again. And he’ll be peeved that Abigail will be leaving Salem and taking Gabby with her. But there won’t be anything he can do about it.

So in the near future, expect to see Stefan drinking alone and lashing out at those around him. Do you think Stefan will find love again, after Gabby? Stay tuned to DOOL and don’t forget to check CDL often for the latest Days of Our Lives spoilers, updates, and news.