Days of Our Lives Spoilers: Week of May 13 Update – Dangerous Grudges, Fierce Attacks and Stunning Revelations

BY Heather Hughes on May 12, 2019 | Comments: 2 comments
Related : Days of Our Lives, Soap Opera, Spoiler, Television 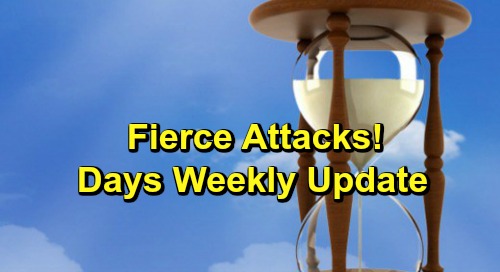 Days of Our Lives (DOOL) spoilers for the week of May 13-17 tease that some stunning revelations are coming up in Salem. First, Will Horton (Chandler Massey) and Sonny Kiriakis (Freddie Smith) will learn the surprising reason for Will’s tumor. The memory serum caused it, so Will’s risk ultimately came back to bite him. It won’t be long until Will’s displaying increasingly erratic behavior.

Meanwhile, Lani Price (Sal Stowers) will deceive Ben Weston (Robert Scott Wilson). She’ll lie to him in hopes of protecting David Ridgeway, but it should hurt once Ben realizes the truth. Over with Hope Hernandez (Kristian Alfonso), she’ll get in touch with Belle Black (Martha Madison) and seek a favor. It seems Hope will want some divorce help, so it won’t be long until she’s officially ending her marriage.

Days of Our Lives spoilers say Rafe Hernandez (Galen Gering) will decide he’s done fighting. He still loves Hope, but this is just too hard. Rafe will sign the divorce papers on the spot and insist they should go their separate ways. He’ll decide to take Lani’s advice and throw himself into caring for David. Rafe has always wanted to be a father, so this is his chance to do it right and enjoy it.

Other Days spoilers say Sarah Horton (Linsey Godfrey) will console a rejected Eric Brady (Greg Vaughan). He’ll be distraught over Holly Jonas’ (Harlow and Scarlett Mallory) “death” and the blame game Nicole Walker’s (Arianne Zucker) playing. Sarah will assure Eric that this tragedy wasn’t his fault. She’ll do whatever she can to support Eric and perhaps hold out hope for their future together.

Next, Xander Cook (Paul Telfer) will back Brady Black (Eric Martsolf) into a corner. He’ll still have leverage on Nicole, so he’ll push Brady to make a deal with him. Maybe Xander will want that Titan job he’s been after. If Brady agrees to it, that’d probably be enough to make Xander grant Nicole a divorce.

Whatever the case, Nicole will indeed gain her freedom from Xander. Her situation will improve while Haley Chen’s (Thia Megia) gets so much worse. Days of Our Lives spoilers say Haley will deported after the marriage sham falls apart. Of course, that’ll be thanks to Eve Donovan (Kassie DePaiva) and her blackmail efforts.

After Tripp Dalton (Lucas Adams) realizes Claire Brady (Olivia Rose Keegan) had a hand in that, he’ll hit the roof. Tripp will leave Claire devastated when he no longer wants anything to do with her. DOOL fans can expect Ciara Brady (Victoria Konefal) to offer comfort, but she wouldn’t do that if she knew Claire tried to kill her in the cabin fire!

Back with Haley, she’ll face a shocker when Melinda Trask (Laura Kai Chen) reveals she’s Haley’s mother, not her sister. JJ Deveraux (Casey Moss) will end up lashing out at Jack Deveraux (Matthew Ashford) before going on the run with Haley. That’ll leave Melinda to arm herself with a gun and prepare to do her worst to Jack.

Across town, Gabi Hernandez (Camila Banus) will face Stefan DiMera’s (Brandon Barash) rejection. She’ll have to figure out some new strategies to get what she wants, but you can bet Gabi won’t give up. We’ll give you updates as other Days news comes in. Stay tuned to DOOL and don’t forget to check CDL often for the latest Days of Our Lives spoilers, updates and news.