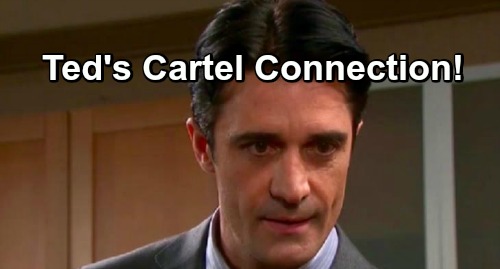 Days of Our Lives (DOOL) spoilers tease that Ted Laurent (Gilles Marini) has something to hide. He received a mysterious phone call from someone who he absolutely did not want to hear from, and this isn’t the first time that Ted has seemed to have a secret. A few weeks ago, Diana Colville (Judith Chapman) indicated that she had seen Ted’s presumably dead wife in Europe very recently. Of course, Ted brushed it off as impossible, but you never know.

Days of our Lives spoilers indicate that Ted will be caught on some additional phone calls that will raise eyebrows. First, Eli Grant (Lamon Archey) will overhear Ted on the phone talking to someone, when he mentions both Hope Hernandez (Kristian Alfonso) and Chloe Lane (Nadia Bjorlin). Hope’s name coming up wouldn’t surprise Eli much, but Chloe’s name being mentioned by Ted will raise Eli’s suspicions.

As far as anyone knows, Ted doesn’t really know or associate with Chloe, so why would he be discussing her with someone? It will just seem strange to Eli, whose detective instincts will be piqued.

Of course, Eli knows that Chloe is currently the target of El Fideo’s (Andoni Gracia) drug cartel thugs, who are after her for killing El Fideo last year. The thugs seem determined to kill Chloe or otherwise harm her or her kids.

And if this weren’t enough, DOOL spoilers say that Kate DiMera (Lauren Koslow) will also catch Ted on a strange call, and again Chloe’s name will be mentioned. Like Eli, Kate will find the connection between Ted and Chloe to be strange, and she’ll wonder exactly what’s going on.

Given Ted’s mention of Chloe twice, and Chloe’s current situation, we have to seriously wonder whether Ted could be connected to the cartel. Ted’s been a shady character ever since he arrived in Salem, and it wouldn’t be a stretch for him to be involved with organized crime.

Time will tell whether Ted is working for the cartel, but it’s looking pretty likely. Do you think he’s mixed up with El Fideo’s men and poses a danger to Chloe? Stay tuned to DOOL and don’t forget to check CDL often for the latest Days of Our Lives spoilers, updates, and news.