Days of Our Lives Spoilers: 2 Weeks Ahead – Holly Is Kidnapped – Nicole’s The Prime Suspect 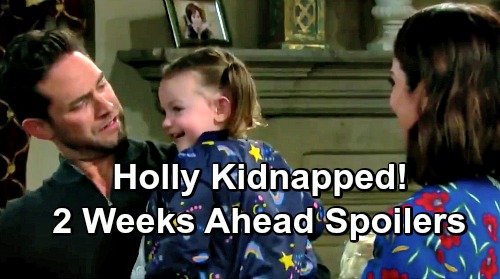 Days of Our Lives (DOOL) spoilers tease that Chloe Lane (Nadia Bjorlin) will soon be panicked. She’s been on edge for a while now, ever since she found out that El Fideo’s (Andoni Gracia) drug cartel thugs were after her to avenge his death. She moved into the DiMera mansion for protection from the thugs, and unfortunately that hasn’t gone so well.

Since Chloe moved into the mansion, someone took a shot at Ciara Brady (Victoria Konefal) thinking Ciara was Chloe. And according to Days of Our Lives spoilers, there will soon be more gunfire and chaos at the DiMera mansion, as Rafe Hernandez (Galen Gering) gets shot and Eli Grant (Lamon Archey) shoots and kills a cartel member.

But that’s not all that’s going to happen. Days of Our Lives spoilers say that Holly Jonas (Harlow and Scarlett Mallory) will eventually be taken from the DiMera mansion. Yes, it’s time for another DOOL kidnapping.

Of course, Holly is Nicole Walker’s (Arianne Zucker) daughter whom Chloe is raising. But the cartel doesn’t know that, and it looks like Chloe, Stefan DiMera (Brandon Barash), and others will assume that the cartel is behind the kidnapping.

And it’s quite likely that the cartel could be the culprit. They’ve been hell-bent on making Chloe suffer, and it’s possible they gave up on their efforts to kill Chloe and decided to go after her kids instead.

But that begs an important question. If the cartel were to kidnap Holly, then wouldn’t they kidnap Parker Jonas (Christian Ganiere), too? Why would they just kidnap one kid?

Well, there may be another possible kidnapper…Nicole herself. As viewers know, Arianne Zucker is soon returning to DOOL to reprise her role as Nicole.  She’ll be on canvas starting on Thursday April 25th, so the timing looks to be about right. Could Nicole come back to Salem for her daughter?

The details surrounding where Nicole has been and why she’s had to stay away from her daughter remain to be seen, but it’s entirely likely that she’d want to come back and get her daughter out of the DiMera mansion and away from the danger that she’s in. And of course, no one would suspect her as the kidnapper since she’s supposed to be dead!

What do you think? Who will kidnap Holly? Stay tuned to DOOL and don’t forget to check CDL often for the latest Days of Our Lives spoilers, updates, and news.