Days of Our Lives Spoilers: Xander’s Return Blows Up Eve’s Life – Jennifer Gets Jack Back At Last 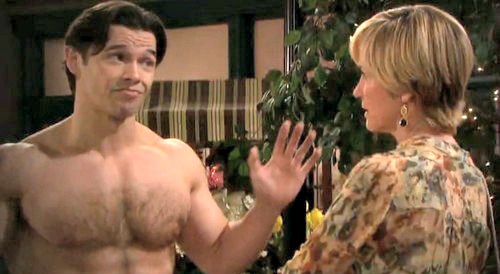 Days of Our Lives (DOOL) spoilers tease that Jack Deveraux (Matthew Ashford) will recall a small piece of his past, but it won’t change his mind about marrying Eve Donovan (Kassie DePaiva). Jennifer Horton’s (Melissa Reeves) plan to stop this wedding will be a total bust, so she’ll fear this is truly the end. Jack just won’t be able to reconnect with Jenn and bring back that old magic.

During the week of April 15-19, Jack and Eve will have their nuptials as planned. Jennifer will cause a slight delay, but Days of Our Lives spoilers insist this ceremony’s still happening. Meanwhile, DOOL fans can expect Jenn to confide in JJ Deveraux (Casey Moss). They’re both distraught over the man that Jack’s turned into, so they’ll lean on each other for support.

JJ even went as far as to wish Jack had stayed dead, so that says a lot about how much rage he’s feeling. Days spoilers state that Jennifer will believe she’s lost Jack forever. She just won’t have hope that her soul mate’s coming back to her.

JJ might disagree if that’s what he feels his mom needs to hear, but he obviously doubts the real Jack’s return, too. Jennifer and JJ just can’t make sense of this guy who acts nothing like the Jack they adored. They may decide they’ll just have to let go and move on, but Days of Our Lives spoilers say things will turn around eventually.

We can’t forget that Xander Cook (Paul Telfer) took off with Dr. Wilhelm Rolf’s (William Utay) diary. He decided to keep it until he can think of a nice trade. That means chaos is still brewing for Eve, who will inevitably want to keep that diary away from Jack. Her whole plan hinges on Jack staying in the dark about his true memories, so he can’t have access to the formula.

Still, Xander is quite the troublemaker. Whether Eve gives him what he wants or not, Xander’s the type of character who causes mayhem just for fun. He might like to sit back and watch Eve’s life implode.

Bottom line, Jennifer certainly shouldn’t give up on the old Jack returning to her. It’s a matter of when it’ll happen, not if. We’ll give you updates as other Days news comes in. Stick with DOOL and be sure to check CDL often for the latest Days of Our Lives spoilers, updates and news.