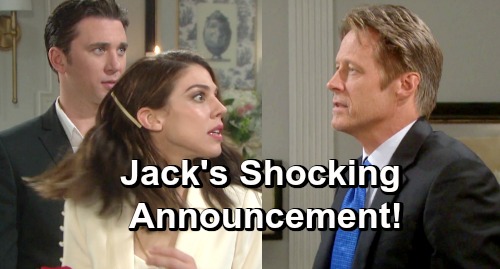 Days of Our Lives (DOOL) spoilers tease that Abigail Deveraux (Kate Mansi) and Chad DiMera (Billy Flynn) will plan some quick nuptials. The couple has just reunited and will plan to marry, then leave Salem for a fresh start in Paris. They’ll plan an intimate ceremony at the Horton house with Julie Williams (Susan Seaforth Hayes) officiating and their closest family present.

But what about Jack Deveraux (Matthew Ashford)? Chad and Abigail may not think to invite him, since he’s not exactly “close” family at this point. Jack still doesn’t remember anything about his life or his family, and the last time that he tried to reach out to Abigail, it was a disaster. Charlotte DiMera was missing, and Abigail didn’t want to have anything to do with him.

But it seems that Jennifer Horton (Melissa Reeves) will insist that Jack be a part of Abigail’s special day. After all, Jack is Abigail’s father, and Jennifer will think that he should definitely be present for the wedding.

So, Jen will pay Jack a visit and do her best to persuade him to come to Abigail and Chad’s wedding. It will probably be a hard sell, especially with Eve Donovan (Kassie DePaiva) butting in and trying to shut down the idea. But ultimately Jack will be persuaded, and he’ll dutifully attend.

The wedding will be an intimate and celebratory affair, with both Charlotte and Thomas DiMera (Asher Morrissette) in attendance. It might be the first time that Jack has been in the presence of his grandchildren, ever. Things might be a little tense at first, but it looks like the wedding will start without a hitch.

But later, during the ceremony, Days spoilers say that Jack will have a sudden announcement to make. He’ll shock everyone when he rises and states that he has something to say. Abigail, Chad, and Jennifer will be taken aback, and they’ll wonder exactly what Jack’s got on his mind.

Jack hasn’t been the most tactful person since he’s been back, so the family may have good reason to fear that he might say something unsettling, or just downright inappropriate. What do you think Jack will announce at his daughter’s wedding? Stay tuned to DOOL and don’t forget to check CDL often for the latest Days of Our Lives spoilers, updates, and news.