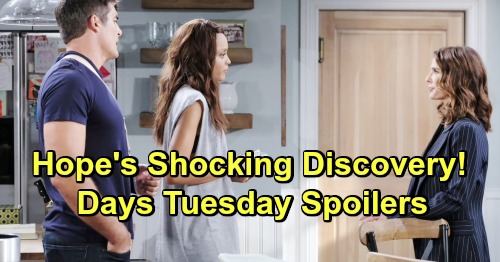 Days of Our Lives (DOOL) spoilers for Tuesday, April 23, tease that Jack Deveraux (Matthew Ashford) and Eve Donovan (Kassie DePaiva) will have something to celebrate. They’ll take a look at their new poll numbers and determine that they’ve made substantial gains. Eve will feel confident that Jack’s going to pull out a win, but they’ll both want to keep the momentum going strong.

Meanwhile, Jack’s competitor will mull over something besides the election. Abe Carver (James Reynolds) almost kissed Sheila Watkins (Tionne “T-Boz” Watkins) the last time they were together, so he’ll take a moment to address it. Unfortunately, Jack will catch their intense conversation and decide this might be a scandal just waiting to happen!

Other Days of Our Lives spoilers say Hope Hernandez (Kristian Alfonso) will head over to Rafe Hernandez’s (Galen Gering) place. She’ll want to give him updates on Ciara Brady’s (Victoria Konefal) rescue and see how he’s doing after that gunshot wound. However, Hope won’t be prepared for Rafe to have some company. She’ll be taken aback when she spots Lani Price (Sal Stowers) in Rafe’s T-shirt.

Of course, nothing inappropriate has gone down so far. Lani simply insisted on staying to help babysit, which meant she needed something to sleep in. She’ll explain that on Tuesday’s DOOL episode, but Hope’s concerns may linger. There are certainly problems in “Rope’s” marriage, but it’s still a marriage for now.

Lani, Ted Laurent (Gilles Marini) and Jordan Ridgeway’s (Chrishell Hartley) baby are all major complications, so Rafe and Hope have to figure out what they’re willing to get past. Over with Brady Black (Eric Martsolf), Days of Our Lives spoilers say he’ll get some stunning news. It looks like Brady will find out about Kate Roberts’ (Lauren Koslow) return to Titan, so he’ll definitely want to complain.

Days fans know Kate has done plenty of horrible things, including many that harmed the company as well as Brady’s loved ones. He’ll object to Victor Kiriakis’ (John Aniston) decision to bring Kate back, but he’ll just have to accept it. Once Victor makes up his mind, there’s no changing it unless he changes it himself!

Finally, Gabi Hernandez (Camila Banus) and Stefan DiMera (Brandon Barash) will have another morning hookup before landing in a tight spot. Stefan will do his best to keep Chloe Lane (Nadia Bjorlin) out of the loop, but it won’t be easy. When Chloe spots Gabi’s button at the DiMera mansion, it’ll raise suspicions and bring some dangerous questions later this week.

It sounds like some fantastic scenes are coming up. We’ll keep you posted as other Days details emerge. Stay tuned to DOOL and don’t forget to check CDL often for the latest Days of Our Lives spoilers, updates and news.