Days of Our Lives Spoilers: Crazy Claire Starts Another Fire – Suspicious Ben Catches Her in the Act

BY Heather Hughes on May 16, 2019 | Comments: 2 comments
Related : Days of Our Lives, Soap Opera, Spoiler, Television 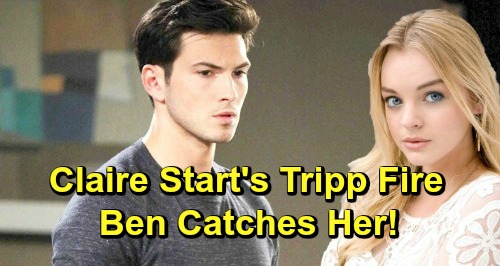 Days of Our Lives (DOOL) spoilers tease that Claire Brady (Olivia Rose Keegan) will move from despair to rage. She’s currently in a state of total devastation thanks to Tripp Dalton’s (Lucas Adams) outburst. He was livid when he realized Claire cost Haley Chen (Thia Megia) her chance to stay in the country. Tripp can’t be with someone so manipulative, so he cut Claire loose permanently.

DOOL fans know Claire has been obsessed with Tripp for quite a while now. That’s why she nearly killed Ciara Brady (Victoria Konefal) in that cabin fire. Claire just couldn’t pass up the chance to eliminate the competition for good. She regretted her actions later, but it doesn’t matter. The point is Claire has a crazy side and it comes out when she’s pushed over the edge.

Days of Our Lives spoilers say Claire will eventually push through her sadness. She’ll decide it’s easier to be angry with Tripp, so she’ll leave her sorrow behind. Perhaps another confrontation will spark this attitude adjustment.

Claire may feel like Tripp isn’t even trying to see her side. To be fair, Tripp did ask a lot from Claire. How was their relationship supposed to work? Tripp married Haley, but he planned to keep Claire as his secret girlfriend on the side. Claire had to move out of the loft and they couldn’t really even spend time together. This could’ve gone on for three years!

That doesn’t make what Claire did right, but it does explain why she was desperate to fix this. Claire was in love and didn’t want to lose Tripp. He gave her an out, but what she really wanted was him. However, everything has fallen apart at this point. Days of Our Lives spoilers say Claire will accept that and embrace her inner nutjob once again.

During the week of May 20-24, Claire will gather up some of Tripp’s clothes and grab a bottle of lighter fluid. She’ll douse the garment pile as she grins with glee. Claire will whip out her lighter to torch Tripp’s clothing, which would be a terrible idea since this will take place in the loft. She could burn the whole building down, but she’ll thankfully be caught in the act and stopped.

Days spoilers say Ben Weston (Robert Scott Wilson) will be the one to walk in. He’ll catch Claire as she tries to start her latest blaze, which will convince him of a theory. Ben will suspect Claire was behind the cabin on fire. He’ll just have to figure out how to prove it!

It sounds like some excellent scenes are on the way. We’ll give you updates as other Days news comes in. Stick with DOOL and don’t forget to check CDL often for the latest Days of Our Lives spoilers, updates and news.