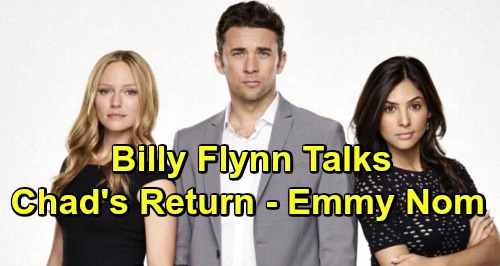 Days of Our Lives (DOOL) spoilers reveal that Billy Flynn (ex-Chad DiMera) is gearing up for this year’s Daytime Emmy ceremony on May 5. He scored a nomination in the outstanding lead actor category, so it should be exciting to see how things turn out. In an interview with Soaps.com, Flynn opened up about what this nom means to him and revealed if a Days return stint might be in his future.

Flynn was thrilled to have his work recognized, but what he really loved was seeing his costars get nominated, too. The key players in “Chabby’s” plot all scored noms, so Flynn thought that was such an honor. He’s proud of the material the writers gave them and how they brought it to life.

“I think the fact that all of us in that storyline got nominated – me, Kate Mansi (Abigail DiMera), Marci Miller (Abigail DiMera) and Tyler Christopher (Stefan DiMera) – is something cool and special,” Flynn said. “We were all so connected.”

Flynn also noted that his second nomination is more satisfying than the first. He got a nom in 2017, but he admitted he got a little too attached to the outcome. Now Flynn is just enjoying the ride and feeling incredibly appreciative. “I think I’m at a different place now,” Flynn said. “When I heard the news, I realized that I’m super grateful.”

Of course, that doesn’t mean Flynn would object to a win! He’d love to get as many Days stars up on that stage as possible. “Tyler and I can’t both win since we are in the same category for Best Actor, and I’d love for him to win,” Flynn insisted. “But if me, Kate and Marci would win, I think that’d be such an insane thing.”

If you’re wondering how that all worked out, Miller’s nom is in the outstanding lead actress category while Mansi’s is in the outstanding guest performer category. Since Mansi’s stint was fairly brief, she was able to squeeze in that group and make sure both Abbys were included. Many Days of Our Lives fans are rooting for both of them as well as Flynn.

As for what Flynn’s DOOL future looks like, never say never! Flynn suggested that Chad could come back down the road. “He’s gone now, but he’s never really gone,” Flynn said. “There’s always that chance that he’ll be revived either by me or by somebody else.”