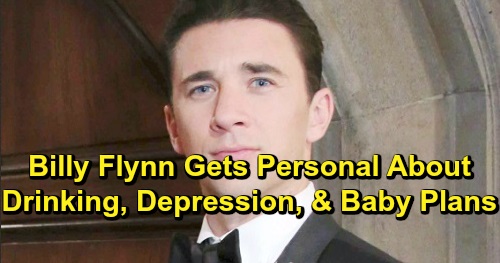 Days of Our Lives (DOOL) spoilers tease that Billy Flynn (Chad DiMera) is speaking out about some big changes in his life. In an interview with Soap Opera Digest, Flynn reflected on being written off Days in 2018 and what he learned during his time off. Although getting the boot seems like it would’ve been a tough blow, it turned out to be exactly what Flynn needed to get his life together.

“It was a nice, needed break for my sanity, and emotionally and all that,” Flynn admitted. He added that the stress and difficult schedule of the job affected him negatively at the time. Flynn’s great-grandmother also passed away, so his world became a challenging place. He ended up using some harmful tactics to cope with his issues.

“I was drinking too much…I was dealing with depression. I was coping with things [in ways] that weren’t healthy for me and it was taking a toll on my life,” Flynn said. Fortunately, Flynn used his time away from Days of Our Lives to rest and gain a better understanding of himself. He talked about growing as a person and evolving – much like the character of Chad.

Flynn felt a lot better coming into his return stint without the pressure he felt before. He ditched the idea of being able to control everything and just focused on his work as an actor. Flynn suggested that offered some freedom and relieved him from the burden of worry. He “found a healthy way to live” along with some peace and happiness.

Flynn also had some kind words for his main costar, Kate Mansi (Abigail DiMera). He insisted “it’s always easy” to work with Mansi and called their chemistry great. Flynn seems glad that they’ve been able to build on “Chabby’s” solid history for so long.

Finally, Flynn had some personal news to pass along. He revealed that he’s been thinking about starting a family! Flynn loves kids, so he’s considering trying for a baby with his wife, Gina Comparetto, pretty soon. “I think maybe we’re going to go for it in the new year,” Flynn said. Let’s hope for some updates on an impending bundle of joy in 2020!

As for what’s next on DOOL, Days of Our Lives spoilers say Chad will face some shockers. “Stefano DiMera” aka Steve Johnson (Stephen Nichols) is keeping some big secrets from his son, so Chad will have quite a mystery to unravel.

DOOL fans won’t want to miss the hot drama ahead. We’ll keep you posted as other Days details emerge. Stay tuned to the NBC soap and don’t forget to check CDL often for the latest Days of Our Lives spoilers, updates and news.