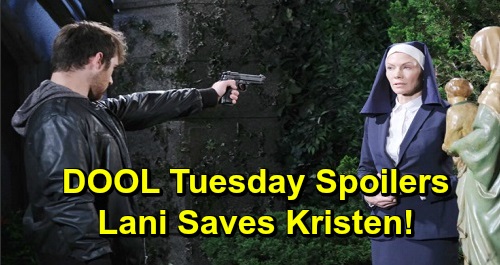 Days of Our Lives (DOOL) spoilers for Tuesday, December 10, tease that JJ Deveraux (Casey Moss) will hear Lani Price’s (Sal Stowers) desperate plea. He wasn’t interested in what Eli Grant (Lamon Archey) had to say, but Lani’s ready to give it a shot. JJ’s got a gun pointed straight at Kristen DiMera’s (Stacy Haiduk) head, so there’s a lot on the line here. Lani certainly doesn’t want Kristen to die, but she also doesn’t want JJ to make a mistake he’ll have to live with for the rest of his life.

DOOL fans can expect Lani to pour her heart out and try to make JJ see that this isn’t the answer. Revenge might bring temporary relief, but it won’t fix JJ’s problems. Killing Kristen isn’t what Haley Chen (Thia Megia) would want and won’t take away JJ’s pain. It looks like Lani will convince JJ to lower his weapon, so he’ll be able to go back to Salem and get the help he needs.

In the meantime, Gabi Hernandez (Camila Banus) will face off with Chad DiMera (Billy Flynn). Days of Our Lives spoilers say they’ll push each other’s buttons in a fierce shouting match. Gabi will ultimately decide she’s sick of putting up with this, so she’ll try to kick Chad out of the DiMera mansion. She’ll insist it’s her house and whatever she says goes.

However, Chad will refuse to listen to Gabi’s orders. He’ll stand up to Gabi and make it clear that he’s coming for her in a big way. Over with Kate Roberts (Lauren Koslow), she’ll warn “Stefano DiMera” aka Steve Johnson (Stephen Nichols) about what she learned from Chad. Kate played dumb when Chad revealed that “Stefano” is alive, but she’s actually in the loop on far more than Chad knows!

Chad’s afraid of disappointing his father, so he hasn’t told “Stefano” about Gabi outmaneuvering him. As a result, Stefano’s expecting good news any minute now. He’s hoping that Chad’s about to close the deal with Kristen, but Kate just showed up to divulge the truth.

Days spoilers say “Stefano” will be irritated with Chad’s lies and incompetence, but Kate may be more upset that “Stefano’s” keeping secrets from her. They’re clearly in cahoots, so Kate expects to be given the proper updates. She may rant about “Stefano” letting Chad carry out this plot without her knowledge.

Other Days of Our Lives spoilers say Abigail DiMera (Kate Mansi) will grill Hope Brady aka “Princess Gina Von Amberg” (Kristian Alfonso). She’ll have plenty of questions about the flash drive, so “Princess Gina” will battle concerns about this growing threat. Abigail’s inching closer to the truth, which means “Princess Gina” needs to figure out an alternate plan – and fast!

“Princess Gina” will consider taking steps to eliminate Abigail, but more twists and turns will throw off that deadly scheme. We’ll keep you posted as other Days details emerge. Stay tuned to DOOL and don’t forget to check CDL often for the latest Days of Our Lives spoilers, updates and news.