Days of Our Lives Spoilers: Brady Gets Confirmation He’s The Dad – Bonds With Kristen After Paternity Test 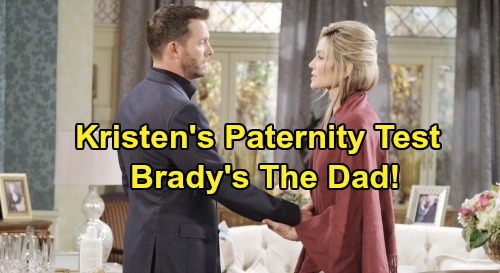 Days of Our Lives (DOOL) spoilers tease that Brady Black (Eric Martsolf) hasn’t been entirely enthused about some of the recent events in his life. As DOOL viewers know, he was duped into sleeping with Kristen DiMera (Stacy Haiduk) back when she was masquerading as Nicole Walker (Arianne Zucker). At the time, Kristen wasn’t even thinking about the possibility that she could get pregnant, given her inability to have children in the past. But now she’s with child, and Brady’s not thrilled.

Still, Brady realizes that there’s an innocent child involved in the situation, and so he’s trying to be supportive of Kristen and her pregnancy…for now. He moved Kristen into the Kiriakis mansion after she essentially threatened to have Dr. Wilhelm Rolf (William Utay) become her personal live-in physician. Of course, that move upset his grandfather Victor Kiriakis (John Aniston) and the other residents of the mansion. But Brady’s determined to support Kristen, as long as it turns out that he’s the father.

Of course, a paternity test can’t be run until Kristen’s second trimester, which is rapidly approaching. She’s assured Brady that he’s the father of her baby, although Brady won’t be totally convinced until the paternity test confirms the matter. So, soon Kristen and Brady will be headed to the hospital for the big test.

Well, according to DOOL spoilers, the test will come back showing that Brady is indeed the father of Kristen’s unborn child, confirming what Kristen has been saying all along, Brady will of course have mixed feelings about the whole thing. On the one hand, he’ll be dismayed to be having a baby with Kristen of all people, but on the other hand he’ll be happy to know he’s going to have another child.

Brady and Kristen will reportedly bond over the pregnancy, and Brady will be there for Kristen as she deals with the high-risk situation – it certainly won’t be an easy pregnancy, given Kristen’s past history and her age. Of course, Kristen’s plan is to win back Brady with the pregnancy – she’s clearly hoping that the baby will bring her closer to Brady, and it seems like she’ll get her wish.

As DOOL viewers know, Brady doesn’t have a great track record with women and doesn’t always make the best decisions in the relationship department, so could we actually be seeing Brady get close with Kristen again? Clearly, he’s attracted to her and he was barely able to resist her advances before he found out that she was pregnant, so will he be even more likely to rekindle the romance now?

What do you think? Do you expect to see Brady back with Kristen soon? Stay tuned to DOOL and don’t forget to check CDL often for the latest Days of Our Lives spoilers, updates, and news.