Days of Our Lives Spoilers: Brady Wakes Up In Kristen’s Bed – Couple Together After Time Jump? 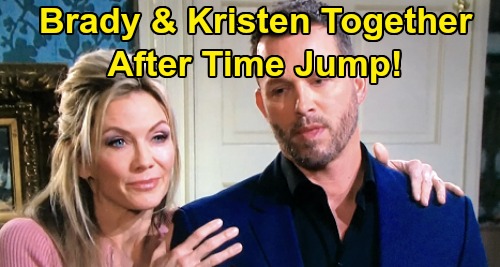 Days of Our Lives (DOOL) spoilers tease that Brady Black (Eric Martsolf) is in for some interesting times ahead. As DOOL viewers know, he’s recently learned that Kristen DiMera (Stacy Haiduk) is pregnant and she’s claiming that it’s his child.

He pretty much believes her, although he’ll wait for confirmation from a paternity test, which she’s offered to take. Nevertheless, he’s preparing himself for the revelation that the baby is his and that he’ll be the dad to the next DiMera heir.

Well, as it turns out, DOOL spoilers indicate that Brady will indeed turn out to be the father of Kristen’s baby. And once that happens, it looks like the two will start to get closer. Kristen certainly seems to have softened since she found out that she was pregnant – clearly, she’s on her best behavior so that she (a) has Brady’s full support, and (b) stands a chance at winning Brady back. Of course, Brady will be a tough sell on getting back together with Kristen, but she’s definitely going to do her best.

Brady Black Will Start To Soften His Attitude Toward Kristen DiMera

Days of Our Lives spoilers indicate that Brady will start to really soften toward Kristen in the days to come. He’ll support her through Stefan DiMera’s (Brandon Barash) funeral, which should be interesting, since Stefan and Kristen weren’t exactly close. But you can bet that Kristen will milk the whole thing in order to get Brady’s sympathy and support. She’ll surely play the grieving sister in order to keep Brady by her side.

Then, Kristen will have some medical appointments. Of course, since her pregnancy is high-risk, every little medical appointment will be a big deal, since problems with the pregnancy could be revealed at any point along the way. Brady will of course accompany Kristen to her appointments, and according to DOOL spoilers they’ll have a touching moment together where they hear their baby’s heartbeat for the first time.

But there will be another big shocker coming, since DOOL spoilers indicate that Brady will wake up one morning in Kristen’s bed. The circumstances surrounding this big event remain to be seen, but chances are nothing intimate will have happened between him and Kristen, although he’ll probably be startled to wake up in her bed.

The whole thing does make us wonder, though, about what’s going to happen between Brady and Kristen during the year that progresses with respect to the big time jump that DOOL will be doing this fall.

As you may know, DOOL plans to advance storylines by one year, so it’s always possible that after a year, Brady and Kristen will be officially back together. Certainly, their baby will have been born, and we’ll see whether that ultimately brings them closer and they become a couple again.

There’s probably a good chance that they will reunite, since Brady seems to be on the weak side when it comes to women, and Kristen is ultra-manipulative when it comes to Brady. But since DOOL has been mum about the time jump and what will happen in the year ahead, we’ll have to wait and see. Do you think that Brady and Kristen will be together after the time jump? Stay tuned to DOOL and don’t forget to check CDL often for the latest Days of Our Lives spoilers, updates, and news.