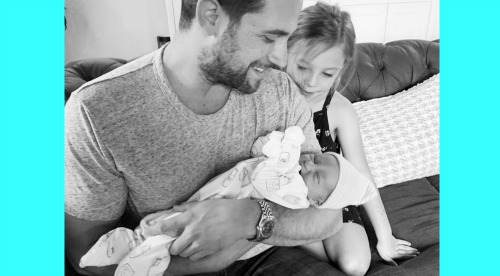 Days of Our Lives (DOOL) spoilers tease that one NBC soap star is celebrating a new addition to the family. DOOL viewers know Brandon Barash as Stefan DiMera in Salem, but his current stint is winding down. There’s always hope for a Days comeback, but Barash’s departure is sad news for now.

Fortunately, there are some exciting offscreen updates to pass along. In a recent Instagram post, Barash revealed that he’s got a new niece! The proud uncle showed off the bundle of joy in an adorable photo. Barash shares a daughter named Harper with Kirsten Storms (Maxie Jones on General Hospital), so he’s he pro when it comes to little ones. He’s clearly at ease when it comes to this sweet baby girl.

Barash revealed his niece’s name in the post and offered some kind words as well. She’ll undoubtedly like looking back at this precious moment once she’s old enough. “As your uncle, I say welcome to the world, June Louise Berman,” Barash said. “Harper and I have your back. There’s nothing more sacred than the birth of a child…and nothing more holy than the crotch of my jeans.”

Of course, that last part’s a joke about Barash’s pants, which have a slight tear in an unfortunate area. It’s barely noticeable, but Barash apparently wanted to poke some fun at himself anyway. He seems like he has a great sense of humor, which many Days of Our Lives fans appreciate. It always makes it fun when DOOL stars kid around and don’t take social media too seriously.

Harper can be seen in the fantastic pic, too. She looks just as proud to be welcoming June to the fam. June’s mom and Barash’s sister shared a few more details in a post of her own. Alison Berman said, “June Louise Berman Born 10.01.19 at 6lbs 3oz. June is named in loving memory of her Bapa, Jerry Lee Barash. We know her namesake is watching over her and protecting her.”

Congrats to the Bermans along with Uncle Brandon! As for what’s next in Salem, Days of Our Lives spoilers say Gabi DiMera (Camila Banus) will continue to struggle. She’ll put up a fight when it comes to Stefan’s heart, but she’ll ultimately relent and pull the plug for Julie Williams’ (Susan Seaforth Hayes) sake.

It sounds like some gripping drama’s ahead, so don’t miss all the action. We’ll keep you posted as other Days details emerge. Stay tuned DOOL and don’t forget to check CDL often for the latest Days of Our Lives spoilers, updates and news.

As your uncle, I say welcome to the world, June Louise Berman. Harper and I have your back. There’s nothing more sacred than the birth of a child…and nothing more holy than the crotch of my jeans. #prouduncle #cousins