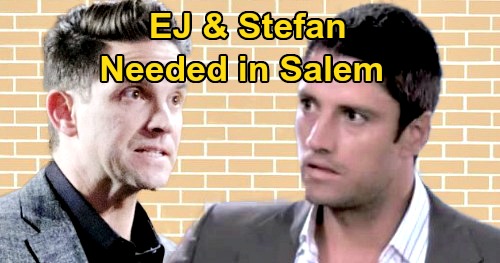 Days of Our Lives (DOOL) spoilers tease that Stefan DiMera (Brandon Barash) isn’t even offscreen yet and fans are already demanding his return. There’s been buzz about Stefan’s comeback being in the works, but we’ll just have to see how that pans out. However, it’s clear that Stefan’s needed in Salem.

Stefan became a popular character with Barash in the role, and many viewers would love to see Stefan reunite with Gabi DiMera (Camila Banus). Of course, there’s another popular DiMera that DOOL watchers have been clamoring for. EJ DiMera (last played by James Scott) deserves to make his triumphant return to Salem, too.

EJ’s been facing a long recovery with Sami DiMera (Alison Sweeney) by his side, he’ll surely be back to his old self eventually – well, almost! Kayla Johnson (Mary Beth Evans) pointed out that EJ would likely be unrecognizable due to his burns, but that presents the perfect recast opportunity. Scott doesn’t seem to have any interest in reprising the role, so it’s time to move on and let a new EJ win us over.

Throw Chad DiMera (Billy Flynn) in the mix and this trio of brothers could really spark some conflict! The DiMera family needs young blood, and they need to be thriving in Salem. It’s what Stefano DiMera (Joseph Mascolo) would want. He’d undoubtedly love to see Stefan, EJ and Chad feuding over the DiMera throne – and perhaps a love interest or two.

Days of Our Lives spoilers say Stefan’s death will leave a serious void for the DiMera clan. He’s not as evil as Kristen DiMera (Stacy Haiduk), but he’s not as nice as Tony DiMera (Thaao Penghlis) either. Gray Days characters are perhaps the most interesting since they have the ability to do dark things, but they often rein in those dark impulses and remain lovable.

Stefan and EJ both fit in the gray category, so it’d be fun to watch them both make comebacks and battle it out. Chad can get down in the mud if need be, but he can also serve as the voice of reason. He’s gray as well, but he has a bit more of a moral compass than Stefan and EJ do. It’s easy to imagine Chad getting caught in the middle of EJ and Stefan’s chaos.

Would you like to see these brothers onscreen together? Should Days of Our Lives recast EJ and bring Stefan back from the dead? You can at least catch Chad in the coming months, so stay tuned for some hot drama. We’ll give you updates as other Days news comes in. Stick with DOOL and don’t forget to check CDL often for the latest Days of Our Lives spoilers, updates and news.