Days of Our Lives Spoilers: Mama Melinda Grabs a Gun After Daughter Haley’s Deported – Jack Is Her Deadly Target

BY Heather Hughes on May 10, 2019 | Comments: 2 comments
Related : Days of Our Lives, Soap Opera, Spoiler, Television 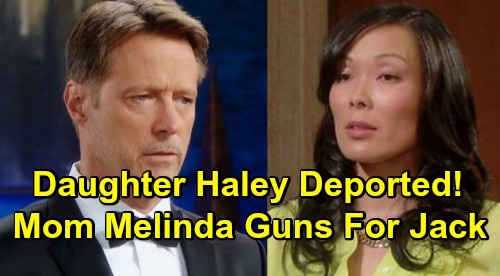 Days of Our Lives (DOOL) spoilers tease that Melinda Trask (Laura Kai Chen) will reveal something that many viewers suspected from the get-go. When we found out Melinda would be connected to Haley Chen (Thia Megia), it was easy to assume they’d be mother and daughter. That’s why it was a strange and suspicious surprise when DOOL claimed Melinda was Haley’s much older sister.

However, Melinda will drop a bomb during the week of May 13-17. After Haley’s blackmailed into exposing her marriage deception, ICE will take her into custody and prepare to deport her. Days of Our Lives spoilers say Melinda will blurt out the truth in desperation. Haley is actually Melinda’s daughter. That may not come as a huge shock to fans, but it’ll certainly come as a huge shock to Haley!

Melinda and Haley will have an emotional confrontation over this buried family secret. Haley just won’t understand why she’s been lied to her entire life. She’ll feel hurt and abandoned, but Melinda will tell her tale and try to explain herself. Unfortunately, none of this will affect Haley’s immigration status – at least not in this moment.

Days of Our Lives state that Haley will still be deported, so she’ll head to the airport with JJ Deveraux (Casey Moss) right behind her. JJ will eventually pull Haley out of this mess so they can go on the run together. Meanwhile, Melinda’s life will be burning down around her. She’ll be filled with remorse over hurting Haley and tormented by the choices that have led her here.

Even so, Melinda will think there’s one person who’s really to blame for all the Days drama. Naturally, that’s Jack Deveraux (Matthew Ashford). Melinda will fume over Jack blurting out that Haley was an undocumented immigrant. He set all this in motion, so she’ll want Jack to pay the price.

DOOL fans can expect Jennifer Horton (Melissa Reeves) to make a disturbing discovery. She’ll walk in on Melinda loading a gun! When Jenn wonders what’s going on, Melinda will make it clear that there’s some unfinished business to take care of. She’ll plan on going after Jack, so things are about to spiral out of control.

Will Jack end up facing an armed Melinda? Will Jenn warn Jack before Melinda can pump a bullet in him? We’ll give you updates as other Days news comes in. Stay tuned to DOOL and don’t forget to check CDL often for the latest Days of Our Lives spoilers, updates and news.