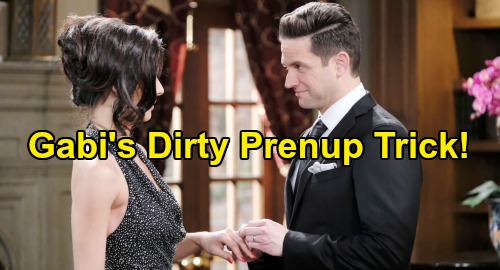 Days of Our Lives (DOOL) spoilers tease that Stefan DiMera (Brandon Barash) will find himself in even more trouble. He wasn’t planning on taking any huge steps with Gabi Hernandez (Camila Banus) so soon, but he admitted there’s nobody he’d rather being marrying right now. This marriage isn’t exactly the real deal, but Stefan is clearly falling hard and doesn’t seem to mind.

However, Stefan doesn’t realize Gabi’s plotting against him. Days fans know she put up a fight on the prenup, but she ultimately caved in and signed it…or so Stefan thinks. We’re betting Gabi used a fake name or merely scribbled based on how it all went down. Stefan didn’t check the documents after Gabi put pen to paper and said, “All right. Signed, you jerk. Done. Mmkay?”

Gabi was far too casual about the whole thing, and it’s far too suspicious that Stefan didn’t take a look. DOOL’s seemingly setting Stefan up for a rude awakening after this wedding ceremony concludes. However, Days of Our Lives spoilers say Gabi’s betrayal is only the beginning. There are even more blows in store for Stefan during the week of August 5-9.

Stefan will be arrested for murder soon thanks to his twisted sister, Kristen DiMera (Stacy Haiduk). After a showdown brings a tragic outcome, it seems Kristen will frame Stefan for killing Ted Laurent (Gilles Marini). Gabi will struggle with her feelings since part of her will want to support Stefan and help him wiggle out of this. She certainly won’t believe Stefan murdered Ted, so she’ll have a choice to make.

Gabi will have to figure out if her love outweighs her hate. In the beginning, letting Stefan rot in prison while she took his company and fortune would’ve been the ideal result. Now Gabi’s actually developed feelings for Stefan, so that’s not the case anymore. Following through with her plan would mean breaking her own heart, even if she’s not ready to admit the extent of how she feels.

On the bright side, Days of Our Lives spoilers suggest Stefan’s dilemma could be Gabi’s chance to make things right. Stefan will inevitably find out about Gabi’s betrayal before or after his arrest. Either way, Gabi could make it up to him by clearing his name – or at least standing by his side through it all.

Are you hoping Stefan forgives Gabi and stays married to her? Do you think they make a good power couple? We’ll give you updates as other Days news comes in. Stick with DOOL and don’t forget to check CDL often for the latest Days of Our Lives spoilers, updates and news.