Days of Our Lives Spoilers: Week of May 27-31 Update – Crazy Discoveries, Crushing Blows and Desperate Plans

BY Heather Hughes on May 26, 2019 | Comments: one comment
Related : Days of Our Lives, Soap Opera, Spoiler, Television 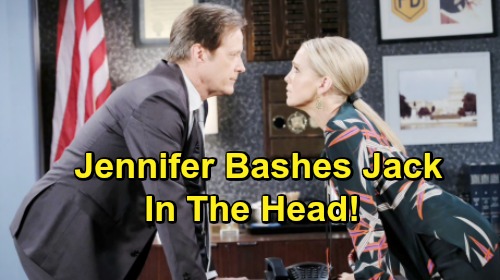 Days of Our Lives (DOOL) spoilers update for the week of May 27-31 tease that some stunning moments are coming up. For starters, Sonny Kiriakis (Freddie Smith) will make a surprising discovery. He’ll walk in Brady Black’s (Eric Martsolf) room at the Kiriakis mansion and find Maggie Kiriakis (Suzanne Rogers) with a liquor bottle. It’s clear that Maggie won’t do a very good job at concealing her relapse.

Later, Xander Cook (Paul Telfer) will spar with his partner in crime. Kristen DiMera (Stacy Haiduk) will remove her Nicole Walker (Arianne Zucker) mask for this confrontation. Once Xander eventually stomps off, Kristen will be left to seethe alone. She’ll fling the door open again when there’s a knock, but it won’t be Xander standing there. It’ll be a drunk, baffled Maggie staring straight at Kristen.

Days spoilers say Kristen will hastily replace the mask and play it off as Maggie’s drunken imagination. Brady Black (Eric Martsolf) will hear this tale from Maggie afterward, but they may both blame the alcohol. Meanwhile, Hope Hernandez (Kristian Alfonso) will head out on her first official date with Ted Laurent (Gilles Marini). Her divorce won’t even be finalized yet, but she won’t see any reason to wait.

Over with Will Horton (Chandler Massey), he’ll face another moment of extreme forgetfulness. It looks like Will won’t know who Tom Horton (MacDonald Carey) and Alice Horton (Frances Reid) are when he looks at their plaque in the square. Later in the week, some crushing news will hit for Will. He’ll learn that without Dr. Wilhelm Rolf’s (William Utay) diary and a way to understand what Will’s up against, he’s going to die.

Will’s tumor can’t be treated with the usual methods, so John Black (Drake Hogestyn) will do everything he can to track down that diary. He’ll realize Eve Deveraux (Kassie DePaiva) once had it, so he’ll beg her to hand it over. Unfortunately, DOOL fans know Xander is in control of the diary now and won’t be sympathetic to Will’s plight.

On the bright side, maybe Dr. Sarah Horton (Linsey Godfrey) could put in a good word for Will. She may be the one person Xander would listen to. Elsewhere, Days of Our Lives spoilers say Tripp Dalton (Lucas Adams) will get caught in a tricky situation. Perhaps Jack Deveraux (Matthew Ashford) will corner Tripp after he helps JJ Deveraux (Casey Moss) and Haley Chen (Thia Megia) again.

Days of Our Lives spoilers state that Jennifer Horton (Melissa Reeves) will leap into action. She’ll bash Jack in the head, which will allow Tripp to escape. It turns out it’ll also loosen a few memories for Jack. He’ll drop a hint about that to Jennifer, so she’ll finally have some hope for the future.

It sounds like some exciting scenes are coming up. We’ll give you updates as other Days details emerge. Stay tuned to DOOL and don’t forget to check CDL often for the latest Days of Our Lives spoilers, updates and news.