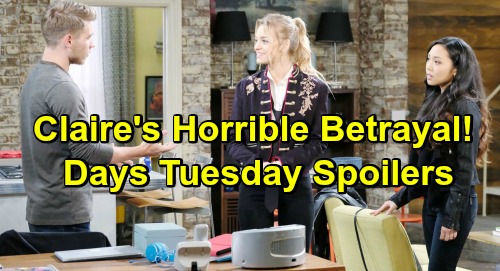 Days of Our Lives (DOOL) spoilers for Tuesday, March 5, tease that Chloe Lane (Nadia Bjorlin) will find proof that a spy’s lurking. She’s been on edge ever since El Fideo’s (Andoni Gracia) men came after to avenge his death. The fact that Chloe’s been hearing noises outside the DiMera mansion certainly hasn’t helped. She’s worried about this dangerous threat, but everything isn’t quite as it seems.

DOOL fans can expect Chloe to stumble across some troubling evidence. She’ll realize someone’s indeed watching her, so she may freak out and tell Stefan DiMera (Tyler Christopher) what’s up. Of course, Stefan will offer reassurance. He promised to keep Chloe and the kids safe, and that’s a promise he intends to keep.

Fortunately, there’s no real peril. Days of Our Lives spoilers say Brady Black (Eric Martsolf) hired someone to look out for Chloe. That probably won’t be revealed until later this week, but at least we know Chloe won’t be harmed by some thug! Brady’s actually trying to protect Chloe, even if he’s scaring her in the process. 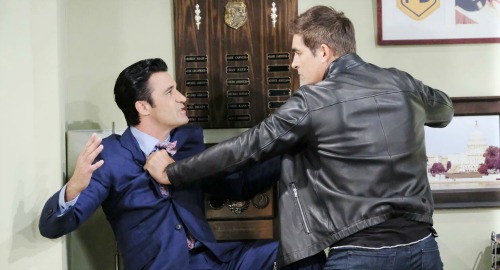 Other Days spoilers state that Rafe Hernandez’s (Galen Gering) feud with Ted Laurent (Gilles Marini) will continue. Rafe just lunged at Ted in a heated moment, so we’ll see even more conflict on Tuesday. Ted did his best to cozy up to Hope Hernandez (Kristian Alfonso) while Rafe was out of town, so Rafe wants to make himself crystal clear. He’ll insist that Ted had better stay away from Hope – or else.

Over with Haley Chen (Thia Megia), she’ll get settled in the loft as Tripp Dalton (Lucas Adams) offers comfort. He’ll let Haley know that he’s got her back, but Tripp’s not the problem here. Claire Brady (Olivia Rose Keegan) won’t be pleased when she learns a romantic rival has just moved in. She’ll notice the growing bond between Tripp and Haley, so she’ll start thinking about how to change that. 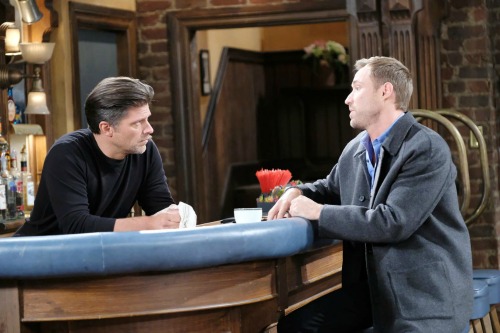 Elsewhere, Days of Our Lives spoilers say Rex Brady (Kyle Lowder) will rev up the pressure. He’s eager to marry Sarah Horton (Linsey Godfrey), so he’ll once again try to convince her this is the right decision. Sarah’s been reluctant to agree, so Rex will feel like Eric Brady (Greg Vaughan) is his only hope. He knows Eric and Sarah have a special connection, so he’ll count on Eric to make this happen for him.

Rex doesn’t realize there’s more than just friendship between Eric and Sarah. They’re obviously falling in love, so Rex is turning to the wrong person for help! We’ll give you updates as other Days news comes in. Stick with DOOL and don’t forget to check CDL often for the latest Days of Our Lives spoilers, updates and news.