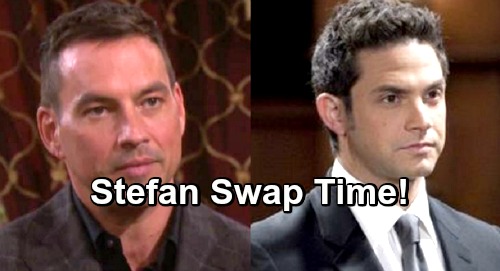 Days of Our Lives (DOOL) spoilers tease that a long-awaited actor swap is coming up. It’s been months since we first heard about Brandon Barash (ex-Johnny Zacchara on General Hospital) taking over for Tyler Christopher as Stefan DiMera. Due to how far DOOL films in advance, Days fans and some General Hospital fans have been waiting a long time for the switch to finally happen.

Fortunately, the wait’s almost over. Daytime Confidential’s set-side sources point to March 20 as Christopher’s last airdate. They also reveal that Barash will step into the role starting March 22. Days of Our Lives spoilers say the new Stefan will jump right in the action. Viewers will have a chance to see what Barash’s version is like and how his pairings will fare with a new actor in the part.

Christopher’s Stefan has some good chemistry with Chloe Lane (Nadia Bjorlin). Many Days fans noticed it during their first interaction. There was already a push for the couple shortly after Stefan hit town, but DOOL didn’t take that route right away. Instead, they made the bizarre decision to let Stefan fall in love with Abigail DiMera’s (Kate Mansi) alter, “Gabby” – a woman who didn’t really even exist.

Now Stefan’s finally growing closer to Chloe, but will the actor change throw things off? The chemistry will inevitably be different, so it could take some getting used to. Of course, the real test will be the new Stefan’s chem with Gabi Hernandez (Camila Banus). Days of Our Lives spoilers suggest Stefan and Gabi will likely marry eventually, so it’s important for this duo to work.

Christopher’s version sizzles in rage-driven scenes with the sneaky Hernandez, so let’s hope Barash’s version will as well. Days of Our Lives spoilers say Stefan will have a fierce faceoff with Gabi next week. There’ll also be some danger at the DiMera mansion, so Stefan may check in with Chloe. These hot storylines should give everyone an opportunity to see how the new Stefan rolls!