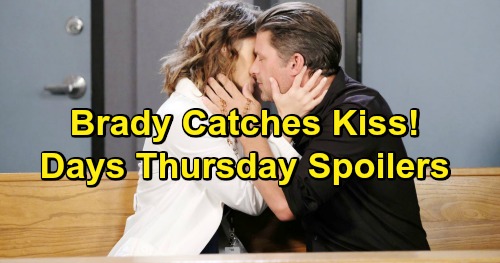 Days of Our Lives (DOOL) spoilers for Thursday, March 14, tease that John Black (Drake Hogestyn) will get big news regarding the attack on Dr. Marlena Evans (Deidre Hall). As Eli Grant (Lamon Archey) sought info that might help the investigation, John recalled a similar plot that Kristen DiMera (Stacy Haiduk) carried out. Kristen is presumed dead, but John suggested you should never presume anything when it comes to Kristen!

Since Diana Cooper (Judith Chapman) was eavesdropping, she’ll decide to history to her advantage. It’s Diana’s best shot at getting away with it since framing Haley Chen (Thia Megia) isn’t working. Days spoilers say a nurse will give John some crucial updates on Thursday. This nurse will claim Kristen was the person who tried to murder Marlena, so he’s sure to be shaken.

Considering the idea it was Kristen is one thing, but having someone back it up is quite another. John will realize he has to step up his efforts to protect Marlena if he wants to keep her around. There’s a good chance the nurse making this claim will be Shelby, the same one who’s already been helping Diana out. Diana seems to be able to talk Shelby into just about anything!

Meanwhile, Eric Brady (Greg Vaughan) will worry about his mom’s health. He’ll hope Marlena’s strong enough to get through this, but his fears will still take a toll. Days of Our Lives spoilers state that Sarah Horton (Linsey Godfrey) will console Eric in the chapel, but she’ll end up going overboard. Before Sarah knows it, she’ll be locking lips with Eric as Brady Black (Eric Martsolf) watches behind them.

You can bet Brady will be ready to blow over this bombshell. He already warned Rex Brady (Kyle Lowder) that Eric tends to steal his brothers’ women. Brady will feel like this kiss proves it, so he’ll lash out at Eric by the time Friday rolls around.

Until then, DOOL fans will see more scheming from Leo Starke (Greg Rikaart). He couldn’t score a position at Titan Industries again, so Days of Our Lives spoilers say he’ll try his luck at DiMera Enterprises. Leo will hope Stefan DiMera (Tyler Christopher) is a kindred spirit when it comes to playing dirty.

Of course, Stefan’s trying to head down a better path thanks to Chloe Lane (Nadia BJorlin), so that could affect how he responds to Leo’s request for a job. We’ll keep you posted as other Days details emerge. Stay tuned to DOOL and don’t forget to check CDL often for the latest Days of Our Lives spoilers, updates and news.