Days of Our Lives Spoilers: Marlena’s Purgatory Preview – Claire Arrested, Will Goes Wild and Belle’s Back for Special Episode 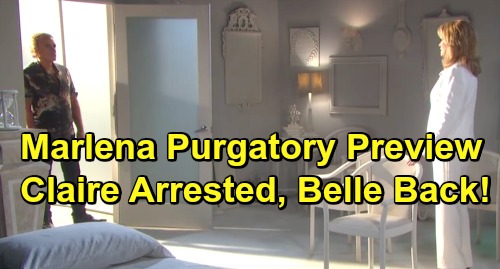 Days of Our Lives (DOOL) spoilers tease that Dr. Marlena Evans (Deidre Hall) will once again nearly die in the hospital. There always seem to be evil forces working against her! This time it’s Diana Cooper (Judith Chapman) who’s determined to finish Marlena off. Thanks to Diana’s plug-pulling, Marlena will find herself in a purgatory of sorts. She won’t quite be dead, but she won’t quite be alive either.

Marlena will learn that her soul needs to cross over, but there’ll be some arguments over where it should go. Thaao Penghlis will reprise his roles as both Tony DiMera and Andre DiMera. They’ll do some bickering along with Princess Gina (Kristina Alfonso). She’ll be a familiar character to longtime Days viewers.

While Marlena’s flatlining, she’ll have a unique experience. Days of Our Lives spoilers say Marlena will see what Salem would be like without her. If you’ve ever seen It’s a Wonderful Life, this will be DOOL’s version of that. Marlena’s fantasy will help her see just how much she’s needed by her loved ones.

Martha Madison will be back as Belle Black for this special episode, which airs on March 18. She’ll be a mess over her mom’s death in this alternate reality. Marlena will watch as Claire Brady (Olivia Rose Keegan) approaches Belle in handcuffs. It looks like Claire will be arrested after she goes off the rails, so Marlena will worry about how much her granddaughter needs her.

Other Days of Our Lives spoilers say Will Horton (Chandler Massey) will go a bit wild. In his part of the fantasy, he’ll lash out at Leo Starke (Greg Rikaart). Will’s going to hurl water all over Leo, who will presumably still have the upper hand in this twisted side of Salem. Leo will look positively giddy, so he should have Will right where he wants him.

Days spoilers state that there’ll be some other surprises, but none of them will leave Marlena at peace. She’ll realize there’s no way she can bail on her family, so she’ll fight to survive instead! We’ll give you updates as other DOOL news comes in. Stay tuned to the NBC soap and don’t forget to check CDL often for the latest Days of Our Lives spoilers, updates and news.