Days of Our Lives Spoilers: Ben Doubles Down On Ciara Breakup – Goes Back To Work For Stefan

BY hellodrdavis on March 1, 2019 | Comments: one comment
Related : Days of Our Lives, Soap Opera, Spoiler, Television 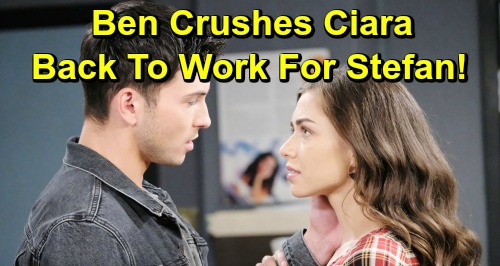 Days of Our Lives (DOOL) spoilers tease that Ben Weston (Robert Scott Wilson) will make a heartbreaking decision. After nearly killing his sister Jordan Ridgeway (Chrishell Hartley) in Ciara Brady’s (Victoria Konefal) hospital room, Ben freaked out. He started to wonder whether he had really changed, or whether he was still the monster who was the “necktie killer.”

Ciara will be devastated by the breakup, but in typical Ciara fashion, she’ll fight Ben’s decision. Ciara will probably argue that there’s plenty of evidence that Ben has changed and isn’t the same person who committed all those murders in the past. Ciara will fight vigorously for Ben and she’ll beg him to reconsider.

But Ben will be determined to protect Ciara from himself. And to make sure that she keeps her distance, he’ll do something that he knows she’ll disapprove of…he’ll go back to work for Stefan DiMera (Tyler Christopher). Ciara strongly disapproved when Ben worked for Stefan before, because of the horrible things he had do to on the job, such as kidnapping Gabi Hernandez (Camila Banus).

Ben will probably figure that if he goes back to work for Stefan, it will upset Ciara and make her not want to be with him. And he’ll likely be right. It will be a calculated move based on his love for Ciara and his desire to protect her from him.

Of course, how Ciara actually reacts to Ben’s employment choice remains to be seen. She’ll probably be irritated at first, but she might figure out what Ben’s up to. Ciara’s pretty perceptive and she may realize that going back to work for Stefan is just Ben’s way of pushing her away.

Do you think that Ciara will figure out what Ben is up to? Stay tuned to DOOL and don’t forget to check CDL often for the latest Days of Our Lives spoilers, updates, and news.