Days of Our Lives Spoilers: Sarah Pregnancy Shocker – Fling With Xander Comes Back To Bite

BY hellodrdavis on February 21, 2019 | Comments: one comment
Related : Days of Our Lives, Soap Opera, Spoiler, Television 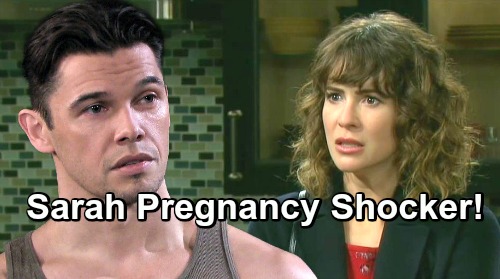 Days of Our Lives (DOOL) spoilers tease that Sarah Horton (Linsey Godfrey) may have some big surprises coming her way. For the most part, Sarah is enjoying her reunion with Rex Brady (Kyle Lowder). Sure, she seems to have some unresolved feelings for Eric Brady (Greg Vaughan), but she seems committed to making her relationship with Rex work.

It seems that Rex will be feeling very committed to Sarah as well. According to Days of Our Lives spoilers he’ll have a marriage proposal on his mind. Rex will want Sarah to say “yes” to marrying him again, so he’ll secretly make plans to pop the big question. He’ll likely bug Eric to help him with his proposal plan, which will put Eric in an uncomfortable spot.

At any rate, Rex will eventually re-propose, but he might not get the answer he wants. Of course, it wouldn’t be too surprising if Sarah said no, or if she wanted to wait to get engaged, after everything she’s been through with Rex in the past. But what if Sarah has an even more startling response for Rex?

We can’t help but think…it was a few weeks ago that Sarah slept with Xander Cook (Paul Telfer). If she were to have become pregnant from that encounter, she’d be finding out sometime about now. Plus, there’s buzz that Sarah’s fling with Xander will come back to haunt her in some way.

What if Sarah were to find out she was pregnant from her night with Xander? That would certainly create a wrinkle in her relationship with Rex, especially if she’s just found out right about the time he was to propose. Of course, Rex wouldn’t really have much room to talk, since he got Mimi Lockhart (Farah Fath) pregnant when he was previously engaged to Sarah!

Still, a pregnancy at this point for Sarah – especially with Xander’s baby – would be a total nightmare for her, and for Rex, especially if they are wanting to start a new life together. Do you think that Sarah will wind up pregnant by Xander? Stay tuned to DOOL and don’t forget to check CDL often for the latest Days of Our Lives spoilers, updates, and news.