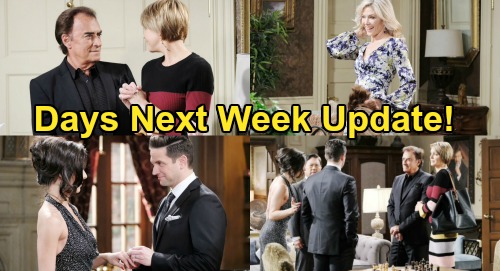 Days of Our Lives (DOOL) spoilers update for the week of July 29 to August 2 tease that things are about to heat up in Salem. For starters, Tony DiMera (Thaao Penghlis) will get on board with Kristen DiMera’s (Stacy Haiduk) plan. He’ll accept her proposal to marry “Nicole Walker” and hopefully gain control of DiMera Enterprises.

Meanwhile, Gabi Hernandez (Camila Banus) and Stefan DiMera (Brandon Barash) will face their own mad dash to the altar. They’ll want to get hitched ASAP so that Gabi will be a CEO contender along with “Nicole.” The oft-mentioned Mr. Shin (Michael Hagiwara) will pick a bride to take the DiMera throne.

Other Days of Our Lives spoilers say Sarah Horton (Linsey Godfrey) will make an epic blunder. She’ll accidentally tip Rex Brady (Kyle Lowder) off to her feelings for Eric Brady (Greg Vaughan), so she’ll decide to just pour her heart out. Sarah will be an emotional mess as she explains how she really feels about Eric.

Over with Jack Deveraux (Matthew Ashford), he’ll demand a divorce due to Eve Deveraux’s (Kassie DePaiva) outrageous behavior. Burning Dr. Wilhelm Rolf’s (William Utay) diary was bad enough, but Jack will be infuriated following the destruction of the remaining serum vials. He’ll think all hope is lost, so he’ll insist all hope’s lost for his marriage, too.

After Jack brings Kayla Johnson (Mary Beth Evans) and Jennifer Horton (Melissa Reeves) up to speed, Kayla will point out that there are still hospital notes. She’ll suggest they may be able to make more of the serum, so Jack will call the lab and hope for the best. Alas, Eve will get to the notes first and shred them. This woman is out of control!

Days spoilers say Jack will immediately fire Eve, so at least she’ll pay the price in some small way. Afterward, Jack will promote Eli Grant (Lamon Archey) to the position of police commissioner and give him something to celebrate with Lani Price (Sal Stowers).

Over with Will Horton (Chandler Massey), he’ll mention something weird that doesn’t line up in Ted Laurent’s (Gilles Marini) kidnapping story. DOOL spoilers state that Hope Brady (Kristian Alfonso) will grow curious, so she’ll search Ted’s apartment and stumble across something shocking. Ted’s going to be on the hot seat soon enough.

Across town, Eric will be stunned by “Nicole’s” marriage to Tony. He’ll also rough Brady up in a heated confrontation, so these brothers will be back at it. Days of Our Lives spoilers say some wild episodes are looming, so don’t miss all the action. We’ll give you updates as other Days news comes in. Stick with DOOL and don’t forget to check CDL often for the latest Days of Our Lives spoilers, updates and news.