BY hellodrdavis on July 26, 2019 | Comments: one comment
Related : Days of Our Lives, Soap Opera, Spoiler, Television 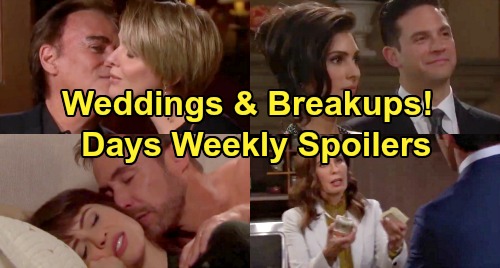 Days of Our Lives (DOOL) spoilers tease that we’re in for a big week of revelations, confrontations, and a huge slip of the tongue. The new DOOL weekly promo for the week of July 29, 2019 promises a lot of action, so let’s jump right in! First off, there the matter of Gabi Hernandez (Camila Banus) and Stefan DiMera’s (Brandon Barash) wedding to talk about.

DiMera Enterprises will be without a CEO, and Gabi’s got a plan. As DOOL viewers know, she floated the idea of becoming Mrs. Stefan DiMera on Friday’s episode, completely stunning Stefan and Abe Carver (James Reynolds) in the process. Of course, once she becomes a DiMera, she’ll be eligible to be considered for the CEO position.

Stefan will ultimately agree to the wedding/CEO plan, and this coming week, we can look forward to a quickly put together wedding ceremony, as Gabi and Stefan are shown all dressed up and ready to tie the knot in the DiMera living room!

But not everyone is going to be enthused about Gabi and Stefan’s union. It looks like Rafe Hernandez (Galen Gering) is going to put up a huge protest when he gets the news. Gabi’s shown in the promo telling a shocked Rafe that she and Stefan ARE getting married, to which Rafe replies, “Over my dead body!”

But it seems that in in the end, Rafe’s push back is going to be a minor detail in the grand scheme of things for Gabi and Stefan their Stabi wedding. The promo also shows a happy-looking Nicole Walker (Arianne Zucker) being kissed on the cheek by Tony DiMera (Thaao Penghlis). Of course, that’s not really Nicole – it’s Kristen DiMera (Stacy Haiduk) in a “Nicole” mask, and she’ll have enlisted Tony to help her (as Nicole) to become a DiMera by marriage.

According to ongoing DOOL spoilers, we’ll ultimately see “Nicole” and Tony tie the knot, and the fight for DiMera CEO will be on between “Nicole” and Gabi…which should be quite the epic battle!

Moving along, we’ll see some conflict for Hope Brady (Kristian Alfonso) as well. She’s shown in the promo confronting Ted Laurent (Gilles Marini) with some huge wads of cash that she finds when snooping around his apartment. She doesn’t look too happy about her big find. We’ll see what else, if anything, she finds with the cash.

As DOOL viewers know, Ted’s trying desperately to conceal a couple huge secrets from Hope, including the fact that he’s covering up Kristen’s existence and that Holly Jonas (Harlow and Scarlett Mallory) is really alive. Chances are, Hope won’t learn everything about what Ted’s been up to, and he’ll have to come up with a quick explanation for having all that cash on the spot.

Next, Eric Brady (Greg Vaughan) is shown physically assaulting Brady Black (Eric Martsolf) and violently pushing him through a doorway in the town square. He’s peeved about something,

and since DOOL spoilers indicate that Brady will soon succumb to “Nicole’s” seductive advances, it’s likely that Eric’s outraged by his brother’s betrayal.

Meanwhile, Jack Deveraux (Matthew Ashford) will decide that he’s had about enough of Eve Deveraux (Kassie DePaiva) in his life, and he’ll decide that he’s not only going to divorce her, but he’s going to fire her from her police commissioner post! He’s shown in the promo telling Eve she’s fired while Jennifer Horton (Melissa Reeves) looks on. Eve doesn’t look too happy about this development, and Days of Our Lives spoilers indicate that she’ll eventually get her revenge on Jack.

All of this will leave Jack without an acting police commissioner, but he’ll remedy that situation soon enough, when he appoints Eli Grant (Lamon Archey) as the new commish! That’s great news for Salem, but perhaps not such great news for Rafe, who’s shown in the promo looking stunned and confused as Eli tells him that he’s looking at his new boss.

Finally, DOOL viewers will see Sarah Horton (Linsey Godfrey) and Rex Brady’s (Kyle Lowder) relationship take a sudden nose dive when Sarah makes a terrible mistake. She and Rex will be in bed cuddling, when Rex tells her how much he loves her. But he’ll be stunned when she responds by saying, “I love you too, Eric.”

Look for an explosive scene to follow – it should be pretty difficult for Sarah to try to explain away that statement, and ongoing DOOL spoilers say that shortly thereafter, Rex will decide to leave Salem. It looks like Sarah’s slip of the tongue will indeed be the death blow to her relationship with Rex.