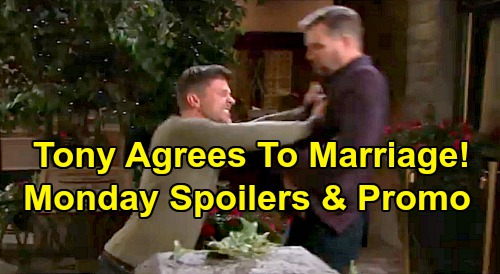 Days of Our Lives (DOOL) spoilers for Monday, July 29, tease that Brady Black (Eric Martsolf) and Sonny Kirakis (Freddie Smith) will consider the future. “Nicole Walker” (Arianne Zucker) assured Brady that she was going to get control of DiMera Enterprises for him. He’s skeptical, but “Nicole” clearly has a few tricks up her sleeve.

Other Days of Our Lives spoilers say Kristen DiMera (Stacy Haiduk) will have a proposal to make – a marriage proposal! “Nicole” will remove her mask, reveal herself as Kristen and beg Tony DiMera (Thaao Penghlis) to come back to Salem. She’ll convince Tony to return with her and tie the knot with “Nicole” as soon as possible.

Over with Gabi Hernandez (Camila Banus) and Stefan DiMera (Brandon Barash), they’ll move forward with plans for their own nuptials. Days spoilers say Gabi will be determined to thwart “Nicole” and secure DiMera as part of her side plot as well. Of course, Gabi’s feelings for Stefan will inevitably cause problems!

In the meantime, DOOL spoilers state that Jack Deveraux (Matthew Ashford) will grow even angrier with Eve Deveraux (Kassie DePaiva). Jack insisted he wants a divorce, but he’ll want one even more after Eve follows through on her threat to smash the serum vials. Jennifer Horton (Melissa Reeves) and Kayla Johnson (Mary Beth Evans) will be stunned when they hear the whole ugly story.

Jack will think he’s out of luck when it comes to getting his memories back, but Kayla will offer one last option. The hospital has notes on the serum, so the lab could possibly produce more of it. Days of Our Lives spoilers say Jack will get in touch with the lab, but he’ll be told there’s just been a police raid. Of course, Eve will be behind that. She’ll get to the notes before Jack and destroy them at the station.

Jack and Jennifer will race to stop Eve, but they’ll be too late. Eve will already have run the documents through the shredder, so she’s about to get fired! We’ll give you updates as other Days news comes in. Stay tuned to DOOL and don’t forget to check CDL often for the latest Days of Our Lives spoilers, updates and news.