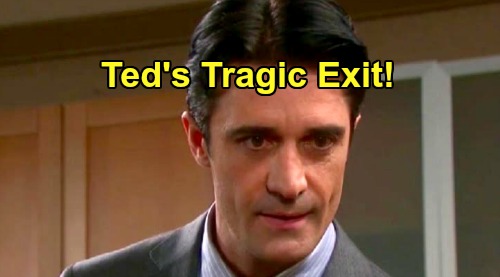 Days of Our Lives (DOOL) spoilers tease that Hope Brady (Kristian Alfonso) will be hot on the trail during the week of July 29-August 2. She’ll find out something odd from Will Horton (Chandler Massey) and determine that she needs some answers. Will’s going to pick up on something strange in Ted Laurent’s (Gilles Marini) kidnapping story, which will lead Hope to rummage through Ted’s place.

After Hope does some digging, she’ll make a stunning discovery that sends her straight to Kate Roberts (Lauren Koslow). Days of Our Lives spoilers say they’ll face off during the week of August 5-9. It sounds like Hope will realize Ted and Kate have indeed been lying. She’ll want the truth about why they lied about Stefan DiMera (Brandon Barash) holding them hostage.

Hope would prefer to talk to Ted about this, but he’ll be busy confronting two scheming Salemites. DOOL spoilers state that Tony DiMera (Thaao Penghlis) will wed “Nicole Walker” (Arianne Zucker), who we know is actually Kristen DiMera (Stacy Haiduk) in a Nicole mask. Their corporate takeover plan will bring some bombshells that Ted disapproves of.

Days of Our Lives spoilers say Ted will spark a fierce confrontation, but it looks like he may regret it. Kristen and Tony will be caught off guard by Ted’s arrival. You can bet Kristen will unleash her anger just like Ted. It won’t be long until things get out of hand, so this showdown will end in a shocking tragedy.

There’s no official confirmation on the outcome just yet, but we do know Ted is leaving Days soon. We also know Kristen will remain in Salem, and Tony will be around for a while, too. The word “tragedy” is usually reserved for deadly or at least incredibly serious spoilers. Only three characters are mentioned here, so it makes sense that Ted may get a deadly exit.

Ted doesn’t have any family connections in town, and he’s infuriated plenty of people. There’s no one to be his friend or love interest. Hope won’t want Ted after his lies are exposed and Kate…well, it’s complicated. There’s some attraction under the hate, but Kate can really take him or leave him.

In other words, there’s no reason to keep Ted alive. It’d be best to just kill him off for drama’s sake. There aren’t many DOOL viewers who’d be clamoring for a Ted return, so why not just get rid of him permanently? Perhaps Ted will fall to his death or something alone those lines. It’d be easy to do during a fight with Kristen and Tony. Tragedy implies misfortune rather than coldblooded murder.

Will you miss Ted at all? Will his Tony and Kristen conflict prove fatal? We’ll give you updates as other Days news comes in. Stay tuned to DOOL and don’t forget to check CDL often for the latest Days of Our Lives spoilers, updates and news.